In the 1970s, Sri Lanka was the success story of ethnic management whereas Malaysia was not. American academic Donald Horowitz argued that it was difficult for Malaysia to emulate the example of Sri Lanka.

However things changed for better for Malaysia. Having successfully managed ethnic relations in the aftermath of the May 1969 racial riots, Malaysia came to termed as successful example of a multi-ethnic experiment in con-sociational politics.

Meaning the management and resolution of ethnic conflicts through elite cooperation. However, with the dawn of racial riots in Sri Lanka against the minority Tamils, Sri Lanka became an unsuccessful case of inter-ethic management.

The rest is history.

The move to embrace politics in favour of the majoritarian ethnic Sinhala community laid the seeds of three decades of secessionist conflict that claimed thousands of lives.

Malaysia avoided the path of Sri Lanka by not overtly discrimination against the non-Malays but nonetheless the ground was slowly laid for the emergence of majoritarian politics predicated on race and religion.

I met academic Horowitz some years back in Malaysia.
In fact, he was in Penang to interview me for his new book on ethnic relations in Malaysia.

Horowitz said that although he might have been wrong about Sri Lanka and Malaysia when he published his book in the 1970s, he fears that extremism might rear its ugly head in Malaysia.

He said that even though Malaysia might have avoided the path of Sri Lanka, but the transformation of politics in the direction of majoritarian, Malay interests, was quite worrisome to him.

He opined that Malaysia must avoid the path that Sri Lanka took in the 1980s, politics of excluding the minorities from the mainstream development and progress.

I am not sure whether he has published the book that he researched for. It was the former prime minister of Singapore Lee Kuan Yew who consistently warned Sri Lanka that the exclusion of Tamils might be disastrous to the country.

He was proven right with the rise of the Tamil movement to seek an independent homeland called Tamil Elam.

Malaysia might not go go down the disastrous road traveled by Sri Lanka if sanity prevails.

It is not too late.

Exclusionary politics of the present PN and former BN government are not conducive for the emergence of a political system based on the respect and rights of all ethnic communities.

It about time to think of slowly dismantling the majoritarian system that is based on race and religion. Sri Lankan might have militarily tamed the Tamils, but such as an attempt was an economic disaster for the country.

The Sinhala ethnic chauvinist leaders having gained the confidence of the majority never realised that there huge economic and financial costs in managing the country.

The three decades civil war bled the economy excessively.
Hardly 12 years after the victory against the Tamils, Sri Lanka has come to a standstill economically and financially.

President Gotabaya Rajapakse remains as the president despite calls for his ouster. The latest: an emergency has been declared to surmount the unprecedented crises.

Even the IMF’s proposed bailout might not be sufficient. China the “knight in the shining armour” might not be prepared to bail out the country as its debts have not been paid back.

Sri Lanka fits the description of a tear drop island.

The question is who will save the country from the man made disaster?

It not too late to learn some significant lessons from the trajectory of Sri Lankan politics especially why the path traveled should be avoided like a plague in Malaysia.

Are our ethnic and religious champions prepared to see as to what happened to Sri Lanka including the extent of the horrific pitfalls of exclusionary nationalism?

Malaysia might managed ethnic relations much better than Sri Lanka.

However, the emergence of exclusionary politics of race and religion might take us back to the calamitous road traveled by Sri Lanka. 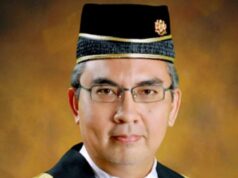