SHAH ALAM, Feb 4 – The High Court here today rejected with costs the application by the Selangor government and Menteri Besar Tan Sri Abdul Khalid Ibrahim to set aside a suit filed by 711 water consumers in the state.
The suit is over Abdul Khalid and the Selangor government’s failure to provide free water as promised in the opposition coalition’s last election manifesto in 2008.

Judicial Commissioner Datuk Hashim Hamzah made the decision after hearing submissions from both sides and also fixed April 15 for case management. On Sept 11 last year, 711 water consumers in Selangor became the first group to file such a suit, demanding compensation of over RM400,000 and named Abdul Khalid, the Selangor government and Syarikat Bekalan Air Selangor Sdn Bhd (Syabas) as defendants.

Lawyer Kamarudin Ahmad who is representing the plaintiffs, said the court’s decision showed that the people of Selangor had the basis to drag the state government and Abdul Khalid to court for making an empty promise.

“Hopefully, this will be a lesson for the state government to listen to the grouses of the people as the plaintiffs are from the lower-income group. They are disappointed because the state government had failed to fulfil its promise until they had to take the trouble to come to court to fight for their rights,” he told reporters outside the courtroom.

In their statement of claim, the 711 water consumers stated that during the last election campaign in April 2008, the people of Selangor were promised free water for the first 20 cubic metres of domestic use monthly.
They claimed that based on the election manifesto, each domestic consumer in Selangor having an account with Syabas was eligible to receive the water subsidy of RM11.40 per month, regardless of whether the consumer was using an individual meter or a bulk meter.

They said that after winning Selangor in the elections, the state government started implementing the free water scheme on June 1, 2008. However, they claimed that they had not been receiving the free water promised and found no deduction in charges for the first 20 cubic metres of water usage in their water bills issued by Syabas.

The plaintiffs also claimed that Abdul Khalid in a press statement issued on Aug 30 last year, said that water consumption still using the bulk meter was not eligible for the free water subsidy.

They claimed that Syabas should be replacing their meters as the state government had instructed it to change the bulk meters to individual meters since 2007 but Syabas failed to do so. The plaintiffs are demanding a compensation of RM405,270 from the state government and/or Syabas or alternatively, be paid compensation for the first  20 cubic metres of water monthly, which they have paying since June 2008.

They are also seeking a declaration that the Free Water Scheme promised by the Selangor government covers all water consumers in the state, regardless of whether they are using the individual or bulk meter. 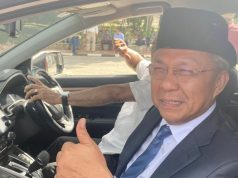