KUALA LUMPUR, Aug 1 – The government had provided 1,712 closed-circuit television cameras (CCTVs) in crime-prone locations nationwide up to last month, as part of its crime-prevention efforts.

“The installaton of the CCTVs is in two phases with 496 units installed by 25 local authorities in the first phase and another 496 units in the second phase.

“The installation for the second phase will begin this month and is expected to be completed by August next year.

“The choice of locations for the CCTVs is determined by the Royal Malaysian Police based on the concentration of crime incidents in these areas,” she said in reply to a question from Senator Chandra Mohan in the Dewan Rakyat today.

To a supplementary question from Senator Datuk Noriah Mahat on the effectiveness of the CCTVs in curbing crime in the country, Halimah said continuous measures must be taken in fighting crime.

“In creating save cities, the involvement of all parties is necessary by playing the role of a ‘police citizen’ or member of a ‘neighbourhood watch’ group, besides coming forward as a witness in crime incidents. 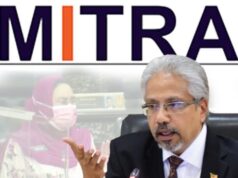