Colombo (dpa) – Maldives President Abdulla Yameen Abdul Gayoom escaped unhurt from an explosion in a speed boat Monday, but his wife and at least three others were injured, a spokesman for his office said.

He said the president’s spouse Fathimath suffered minor injuries in the explosion that occurred as they were returning to the capital Male from a nearby island.

The cause of the blast was not immediately known.

“We are not sure if it was an accident due to a mechnical defect or caused deliberately. It is under investigation,” said Mohamed Hussain Shareef, minister of the presidential office.

Witnesses told local media that they had seen a door of the speedboat being blown off in the explosion.

Yameen was elected in November 2013. He defeated former president Mohamed Nasheed, who is serving a 13-year jail term for illegally ordering the detention of the nation’s chief judge. 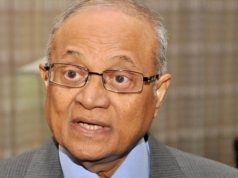