GEORGE TOWN, March 22 – The Barisan Nasional (BN) government should use the cyber space as a medium to counter the opposition’s tactics in manipulating information to build a negative image of the government. A senior lecturer at Universiti Sains Malaysia (USM), Associate Professor Dr Sivamurugan Pandian(Pic) said the pro-government ‘cyber troopers’ should play an active role, not only in their own blogs, but also in the news portals to change the people’s perception.

“News portals, like the Free Malaysia Today, Malaysiakini and Malaysian Insider are popular references, but sometimes the comments are aimed at manipulating the public perception on certain matters,” he added. Speaking to reporters after attending a discourse “Kemunculan Media Baru dalam Konteks Malaysia Masa Kini dan Kesan Kepada Masyarakat” organised by the Penang Information Department here today, he said the pro-government alternative media should be more creative in disseminating information.

In the two-hour discourse, he slammed Internet users who tried to be unaccredited journalists in trying to sensationalise and giving their opinions on various issues in the name of freedom of expression without considering the sensitivities of the people. 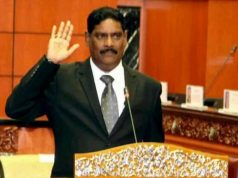