Transport Minister Anthony Loke Siew Fook said a police report had been lodged by the  airport management last night and the ministry would wait for the full report of the investigation.

“Actually I have no intention of prolonging this issue, neither do I want any publicity from it. But since a police report has been made, let the police carry out their duties, I will wait for the full report of the investigation,” he said. 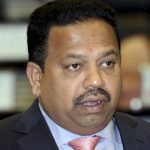 Based on a recording of a closed-circuit television camera, the incident, which took place at 10.14 pm last  Nov 14, Vigneswaran, who is also MIC president, was stopped by an airport employee  for not adhering to the dress code while using the VIP lane. He was said to be wearing sandals at that time.

However, Vigneswaran did not stop and continued to walk  downstairs towards the VIP lobby.

Loke said since the new government defended and observed the rule of law, the ministry would not hesitate to defend government officers who carried out their duties in accordance with  procedures and protocol.

“I was told that such cases had also occurred under the previous  government administration, but nothing was done even though officers lodged formal complaints,” he added.

Loke  said Vigneswaran had not made any apology as he was of the view that he had not committed any offence, adding that it was his right whether to apologise or not.

“For me, if we have hurt others with our words or actions, apologising is the best thing to do. An apology will not in any way degrade one’s reputation, especially since (in this case) he has a respected position in the Senate, he should have shown a good example to others,” he said.

In another development, Loke said the ministry was always looking for new ways to help all groups including taxi drivers and car rental operators.

“We encourage the group to implement e-hailing to help increase their income. Through this system, they can get more customers instead of relying on the usual method,” he said.

The ministry’s efforts to assist taxi drivers would continue after the Land Public Transport Agency is set up next year, he said.

He said this when commenting on the launch of the Taxi Drivers’ Child Assistance Fund and Johor State Car Rental by the Johor government.