PKR vice-president Tian Chua was this morning deported back to Peninsular Malaysia, after he was detained by immigration officers in Sabah after landing at the Kota Kinabalu airport.

“Landed at Kota Kinabalu at 11.05am, the immigration stopped me at the counter and brought (me) to the office.

“I was told Sabah government issued a denial of entry order (against me),” Tian Chua, the incumbent MP for Batu, said in aTwitter posting.

Nasrun, an assistant minister in the Chief Minister’s Department, said the blacklisting was to prevent Tian Chua from “spreading his unacceptable culture” in Sabah.Tian Chua had reportedly told PKR party organ Keadilan Daily on March 1 that the Lahad Datu incursion by Sulu intruders was “an Umno conspiracy”.

He later clarified that he was only referring to the earlier media blackout on the incursion, as there was no confirmation of any attack or casualties. The ban comes at a critical time, with Parliament dissolved last Wednesday and campaigning for the general election is expected to begin later this month.

“There is no expiry date for the denial of entry order.

“I assume (it will be) throughout the general election campaign period. Hopefully it will be revoked when Pakatan wins,” Tian Chua says in another Twitter another posting. 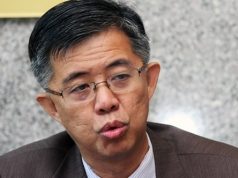