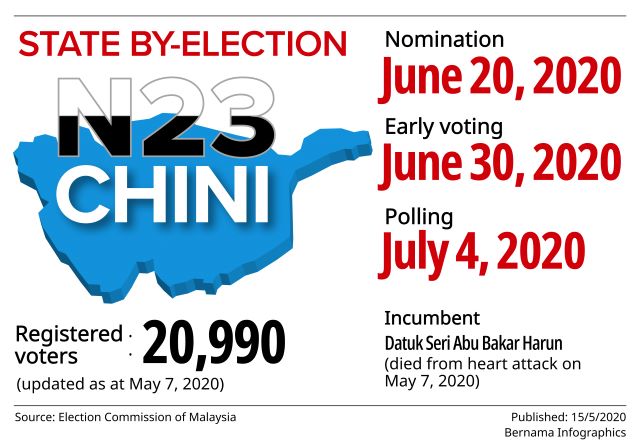 PEKAN — Myth has it that  a monster lurks in the depths of the 5,085-hectare Chini lake in this district ala the Loch Ness monster in Scotland.

Well, the nomination process for the Chini state by-election gets underway here from 8 am today, which will be making Malaysian electoral history as this will be the first constituency election in the country that will take place in the “new normal”, i.e with another “monster” – COVID-19 – lurking in the background.

Chini is among four state seats under the Pekan parliamentary constituency, which is held by former prime minister Datuk Seri Najib Tun Razak.

The by-election has been necessitated by the death of its incumbent Datuk Seri Abu Bakar Harun, 60, from Barisan Nasional (BN), on May 6.

Fortunately for Chini voters, the district is a green zone where COVID-19 is concerned, but the “old normal” will certainly not apply.

With Malaysia having successfully progressed in its fight against the pandemic after imposing a Movement Control Order (lockdown) on March 18 and relaxing it to a Conditional Movement Control Order (CMCO) on May 4  and further easing restrictions with a Recovery MCO (RMCO) from June 10, the Election Commission has decided to allow indoor ‘ceramah” (talks), house-to-house visits and walkabouts, subject to prescribed Standard Operating Procedures (SOPs),  during the campaign period which ends at midnight on July 3.

Yesterday, Malaysia recorded only six new COVID-19 cases overnight, bringing the total tally to 8,535 while the number of recoveries stood at 8,070 or 94.6 per cent. Fatalities remained at 121 or 1.42 per cent.

However, in this by-election, many new rules (SOPs) have to be followed, among them practising social distancing, no “salams” (handshakes) or hugging,  face masks need to worn, hands should be washed or sanitised frequently, attendance records and temperature checks need to be taken (for ceramah)  during the campaign period.

Also based on the SOPs issued by the EC, supporters of the candidates are not allowed to be present at Dewan Utama Institut Kemahiran Belia Negara (IKBN), Pekan, the nomination centre, while processions leading to it are not allowed.

Supporters also cannot come within 1.5km of the nomination centre and another thing that will be different this time around is that besides EC staff, Health Ministry personnel will also be present at the hall to be prepared to act in case a candidate, proposer or seconder shows COVID-19 symptoms.

This 11th by-election since the 14th General Election (GE14) held in May 2018, is the first big test for the Perikatan Nasional government that was formed in February, apart from continuity of the “Muafakat Nasional” cooperation between BN lynchpin UMNO and PAS that started from the Cameron Highlands parliamentary by-election in January last year

Barisan Nasional (BN) has announced Mohd Sharim Md Zain, 41, who is a Pekan UMNO committee member and Majlis Belia Felda Wilayah Kuantan chairman, as their candidate for the traditional UMNO seat in view of Chini being a BN stronghold.

Although Pakatan Harapan (PH) has decided to stay out of this by-election, Mohd Sharim, who is a second generation Felda Chini settler, is expected to be challenged as an independent candidate has stated that he would be contesting.

Businessman Tengku Datuk Zainul Hisham Tengku Hussin, 64, has announced that he would be using the ‘’house’’ symbol and has also come up with a manifesto titled  ‘Menjadi Suara Rakyat Chini’ (Becoming the Voice of the People of Chini).

The nomination process will be held from 9 am -10 am. Returning Officer Datuk Zaliza Zulkipli is expected to announce the names of the candidates by 11 am.

Polling is on July 4.