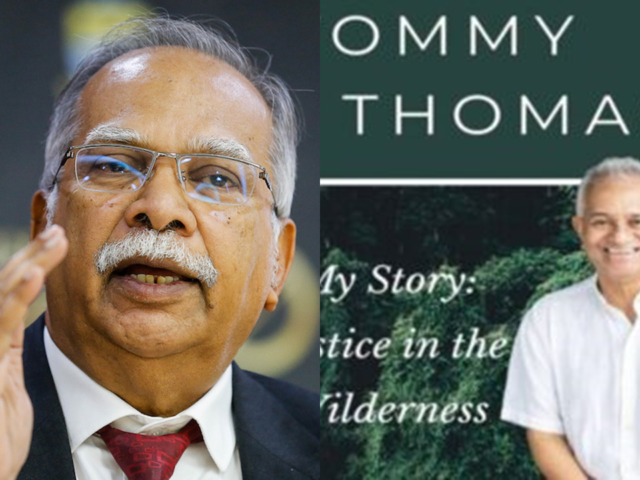 I have met Tommy Thomas in Penang once or twice on a matter that he was representing the Penang state government a few years back.

Other than this, I don’t have any other contacts with him or his firm. Of course, I often heard good things about him, his work and professionalism.

My reading of his recently published autobiography was delayed because I couldn’t get hold of the volume.

Anyway, I have read the book, from page to page.

It was reading at one-go, about more than 500 pages with brief and well organised chapters.

While I read other reviews, I could not comment on it by reading reviews of others, but had to finish reading the book.

The book is well-written, the prose employed and why it kept my sustained interest and enthusiasm in it.

Reviews of Thomas’ book keep appearing, it looks that either you love or hate the book.
It is emerged as the top seller in the Amazon Books.

There is no in-between positions.

Hundred of police reports have been lodged and so are defamation suits. The police will be kept busy for while. As though they have nothing better to do.

Even the former disgraced prime minister Najib Razak has filed a defamation suit against Thomas for accusing him of stealing the 1MDB funds and the alleged murder of the Mongolian model Altantuya Saaribu.

The right wing forces having their sustenance in race and religion have been mobilised against Thomas.

So, what is wrong about Thomas’ publication?

What is his crime?

Is it because he was the wrong person to be appointed to be the AG?
I am not defending Thomas here.

I am sure he is well prepared to take on his detractors.

So far, he has declined rightly so from taking part in online debates and discussions. The application of mob justice might not work with Thomas. It has been tried before.

What he wrote was something important, based on his personal experience as a long time lawyer and attorney general for a short time in the PH government.

He was appointed on his merits and passion for legal work.

No one can dispute this with the exception of the right wing forces or race champions.
Thomas might not have even given the exact facts surrounding certain cases.

It has been consistent in seeking for the extradition of Zakir Naik.

Even though Thomas must be credited for withdrawing the terrorist charges against the 12 LTTTE detainees, the question remains why were they charged in the first place?

Why did the AGC allowed the 12 to be detained when some of the charges predated the gazetting of the LTTE as a terrorist outfit in 2014.

I completely agree with Thomas that the charges against the 12 were indefensible in the court of law.

Even Mahathir agreed to their release, after Thomas explained to him.

Only the right wing leaders in Umno, Bersatu and PAS condemned Thomas for having sided those detainees.

We are told that Muhyiddin was visibly upset by their release.

This was the person who pretended that he had nothing to do with their arrests; it was the work of the police.

Thomas rightly points out the enduring differences between the lawyers in the private sector and those in the public services.

However, if the public sector has come to be staffed predominantly by one ethnic group, then it becomes easy for his detractors to take this view.

As I have seen, Thomas has full of praises for the lawyers in private and public services, irrespective of their ethnic background, as long as they were committed to good and honourable work.

Throughout the book, his emphasis on justice, freedom, responsibility and merit is there.
The climax of the book is the fall of the PH government, hardly in office for two years.

Thomas might have got along well with the former prime minister Mahathir Mohammed. He commended his stand-off policy on legal matters letting the AG to decide.

However, the fall of the PH government was solely the responsibility of Mahathir, according to Thomas.His resignation sealed the fate of PH for good, paving the way for
Muhyiddin Yassin to assume the post of prime minister.

A move through the backdoor with a razor thin majority.

If only had Mahathir agreed to honour the succession plan of letting the PKR president Anwar Ibrahim to become the prime minister, PH would have been intact in the government.

Thomas lays the blame solely on Mahathir for the collapse of the PH government.

Of course, he does not discount factors like the obsequiousness of the PH leaders to Mahathir and the inability of the PH Malay forces to ward off extreme racial and religious attack on the DAP and other non-Malay persons like Thomas himself.

Again, Thomas must be credited for filing charges against those Umno leaders who were engaged in colossal corruption and embezzlement of funds.

The hard work of Thomas and his staff at the AGC was crucial in filing charges and the eventual conviction of Najib.

Thomas was in the “hot and boiling” seat as the AG. He was attacked for asking for the ratification of the ICERD (International Convention for the Elimination of Racial Discrimination) for sticking to the police version on the unfortunate death of fireman Muhammad Adib and for lifting the charges against the 12 persons charged for links with the LTTE.

Thomas might not have been liked by some ministers in the PH administration, but tried to do his job in the best possible manner. Even his appointment was doubtful in the beginning due to backlash from the right wing Malay extremist forces.

Thomas is the first generation Malaysian, parents coming from India’s state of Kerala.
He provides some interesting observations of the past history of the Syrian Christians linked to the St. Thomas Church.

As the famous historian William Dalrymple suggests the legend of one of Jesus Christ’s apostles St. Thomas arriving in the Malabar Coast in the 6th century holds much water amongst those Christians in Kerala who have a strong affinity to St. Thomas Church.
But Dalrymple cautions that while the legend exists but evidence might be lacking.
Perhaps when the Portuguese came and occupied the Malabar coast, they considered the St. Thomas Christians as heretics destroying their places of worship and historical records.

It was the painstaking revival of the oral tradition that kept the adherents together as a cultural and religious community around the St. Thomas Church.