COLOMBO, May 16- A 43-km railway track funded and built by India in war-ravaged northern Sri Lanka was commissioned on Tuesday, Press Trust of India (PTI) reported.

The track between Medawachchiya in the north central province and Madu Road in the north was commissioned at a ceremony presided over by Sri Lankan Economic Development Minister Basil Rajapaksa.

This part of the track and most of the railway tracks from Omanthai to  Kankesanthurai and Medawachchiya to Talaimannar were completely destroyed during Sri Lanka’s three-decade-long civil war.

Trains from capital Colombo to the north had terminated services at the northern town of Vavuniya during the conflict. Since the war ended in 2009, the Indian government has extended its support to Sri Lanka to rebuild the 252-km rail track under a US$800-million credit line.

The Medawachchiya-Madu Road track was the first line to be completed in the post-conflict phase. Indian developer Ircon International is expected to complete the rehabilitation of the northern railway line by March 2014. 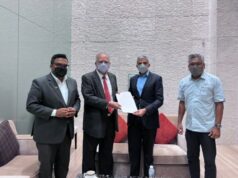