KUALA LUMPUR, May 16- The appointment of Datuk Seri Ahmad Shabery Cheek, 55, as Communication and Multimedia Minister is like a homecoming.

He was Information Minister for almost a year, from March 2008 to April 2009, before he was transferred to head the Youth and sports Ministry.

The Kemaman Member of Parliament since winning the seat in 2004, Shabery was the Foreign Ministry’s parliamentary secretary in 2006 until 2008. He was born in Kijal, Kemaman, Terengganu, and was a lecturer at the Faculty of Economy and Administration, for four years from 1986.

He holds a bachelor’s degree in economy from Universiti Malaya and a master’s degree in political science from the University of Leeds, United Kingdom , where he graduated in 1986.

He also hold an advanced diploma in international relations from the University of Uppsala, Sweden.

In 1989, he was appointed secretary of the Malaysian Social Science Association. Shabery is also a former research fellow at the Institute of Southeast Asia Studies, Singapore (ISEAS). 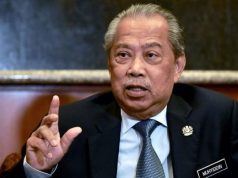