“I’ll take care of Kemaman and my constituency (Kijal). If I used to take care of the whole state before, now I’ll be looking after Kemaman.

“I will help him as long as I serve as an assemblyman,” Ahmad told a news conference at his residence in Teluk Kalong here today.

Ahmad, 57, who is Kijal assemblyman, said he would continue to serve Umno,the party he had been with since he was 19.

On as suggestion that he had betrayed Umno by quitting the party after his successor was sworn in, Ahmad said:

“The question does not arise. This is a matter of struggle. The love for Umno made me come back. If I were a traitor, I would have affiliated myself with PAS.”

Ahmad said he was approached by several PAS members who persuaded him to join the party, but he turned it down.

Terengganu was thrown into a political quagmire after Ahmad quit Umno after his successor, Ahmad Razif, who is also Seberang Takir assemblyman, took the oath of office.

The trio declared themselves Independents, but Roslee retracted resignation letter yesterday followed by Ahmad and Ghazali today to avert a crisis to enable the status quo to remain. 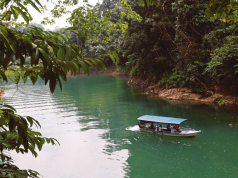