Financial markets around up the world, including on Wall Street, suffered big falls last week amid investor fears that the FBI’s move to reopen its probe into the email affair could result in her challenger, Republican nominee Donald Trump, taking the White House.

But the FBI announced Sunday that it would stick to the conclusion it made in July: That nothing has been discovered that would warrant a criminal investigation.

The US dollar gained ground on Monday and the eurozone’s blue-chip Euro Stoxx 50 index climbed 1.6 per cent to 3,003 points in the wake of the news.

Financial markets have in the past tended to back the normally pro-business Republican candidates in elections in the world’s biggest economy.

But analysts say the sense of uncertainty among investors unleashed by Trump’s populism and the protectionist tone to his campaign – including his plans to roll back global trade deals – have resulted in financial markets swinging behind Clinton’s candidacy.

Monday’s gain in the Euro Stoxx 50 was reflected across national European bourses, with the share markets in both Frankfurt and Paris rising 1.6 per cent in morning trading. The US dollar was up 0.2 per cent against the euro at 1.1066 dollars.

Dow futures also pointed to a strong opening on Wall Street, with stocks tipped to rise by 1.3 per cent after posting losses for nine consecutive trading sessions. 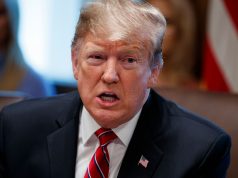 Trump: “I don’t want to hurt the Clintons”