Marawi City, Philippines – Philippine troops on Monday tightened security in areas adjacent to a southern city besieged by Islamist militants, amid fears the gunmen were attempting to flee and sow terror in nearby towns.

More residents were fleeing the city of Marawi, 800 kilometres south of Manila, where dead bodies reportedly litter the streets of districts that were still under the control of the militants.

“They told us that bodies are scattered on the streets,” he added.

Pacasum said humanitarian teams were able to conduct small operations to rescue trapped civilians and retrieve some cadavers but many areas were still not accessible.

“It’s really important to secure everybody,” he said.

In the adjacent city of Iligan, where most of the evacuees were heading to, the army ordered a “lockdown” to prevent the militants from hiding among the displaced, said Colonel Alex Aduca, an infantry battalion commander.

“We are intensifying our security operations,” he told dpa from Iligan. “We have provided containment areas so that we can process evacuees properly.”

Intelligence reports show that the militants are already on the run and trying to get out of the conflict area as the military continued to bombard their positions with airstrikes and machinegun fire, Aduca said.

“They are trying to withdraw and those who can leave might attempt to enter Iligan by disguising themselves as evacuees,” he said.

“We are trying our best to ensure that the terrorist activities will not spill over.”

The violence has left 105 people killed – 61 militants, 20 government forces and 24 civilians, the military and local officials said. More than 3,000 people were still trapped in the conflict zones, according to the Red Cross.

The latest civilian victims recovered were a couple and their three minor children, who were believed executed by the militants, said Zia Alonto Adiong, a spokesman for the provincial government of Lanao Del Sur.

“Government forces are trying to penetrate the areas controlled by the militants,” he said. “The government so far controls 40-50 per cent of the city.“

A nightly curfew has been imposed in Marawi City and residents were urged to wear white armbands or hoist white flags in their vehicles or homes to help government forces identify them, Adiong said.

More than 800 trapped residents have been rescued from their homes as of Monday morning, said Lieutenant Colonel Jo-ar Herrera, an army brigade spokesman.

“Our main concern  is the protection of our people,” he said. “We are working to provide safe passage for all the trapped civilians.”

Amid concerns that the militants were hiding among the displaced, troops have apprehended one suspect among a group of evacuees, prompting authorities to step up the screening of the displaced, Adiong said.

“The man was wearing normal clothes but his hands smelled of gun powder so he was taken into custody for questioning,” he added.

President Rodrigo Duterte declared martial law in the southern region of Mindanao on Tuesday after the militants, who have pledged allegiance to the Islamic State terrorist movement, began the siege to Marawi.

Two days later, the military began to launch airstrikes in a bid to flush out the militants who raised the Islamic State flag in various parts of the city. 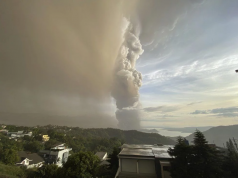 36 die of suffocation in attack on Philippine hotel