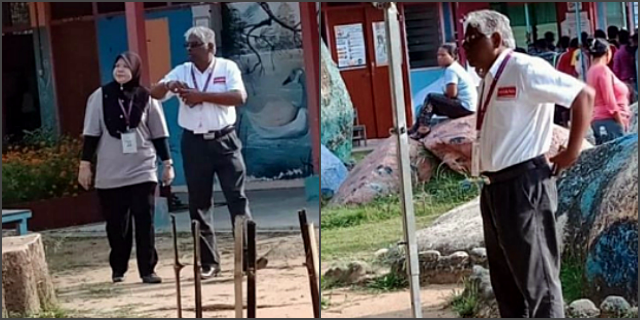 TANAH RATA – The Election Commission (EC) today ordered Pakatan Harapan (PH) candidate M. Manogaran to leave a polling station during polling today in the Camerons Highlands parliamentary by-election because he was wearing a shirt with a party logo.

EC chairman Azhar Azizan Harun said Manogaran was ordered to leave the polling station at Sekolah Kebangsaan Senderut in Kuala Lipis soon after he was spotted in the attire.

He said no one was permitted within 50 metres of a polling station wearing or carrying material spotting the logo of political parties on polling day.

“The EC took immediate action by ordering him to leave the polling station,” Azhar told reporters after monitoring the polling at Sekolah Jenis Kebangsaan (Tamil) Ringlet.

The Cameron Highlands by-election is a four-cornered contest among Manogaran of PH, Ramli Mohd Noor of the Barisan Nasional (BN) and two independents, Wong Seng Yee and Sallehudin Ab Talib. It is being held following the Election Court’s nullification of the victory of Datuk C. Sivarraajh of BN in the 14th general election due to vote-buying.

Manogaran, 61, apologised “to all quarters” over the incident, saying he did not realise that he was still in a shirt bearing the party logo as he had become used to wearing such shirts during the two-week campaign in the by-election.

“I apologise. It is not an issue at all. I will follow the rule. I am sorry for the inadvertence. I did not realise that because I have been wearing such shirts over the past two weeks (of campaigning). It was not intentional. I did not speak to the voters, so it is not an issue,” he told reporters during a visit to the polling station at Sekolah Kebangsaan Betau.

Manogaran also said that it was not his intention at all to challenge the EC rule.

Meanwhile, asked about the alleged giving of hampers to voters in an area last night, as viralled on social media, Manogaran said he was unaware of such a thing.

“I was at an Orang Asli village last night and it was pointed out to me this morning. I have to find out what really happened before I issue a statement,” he said.

Speaking to reporters outside the polling station at Sekolah Kebangsaan Betau, he questioned why NGOs such as Bersih, the Coalition for Clean and Fair Elections, were silent on these matters.

Meanwhile, outside the polling station at Sekolah Jenis Kebangsaan (C) Brinchang, EC chairman Azhar was asked to comment about the statement by MyPPP president Tan Sri M. Kayveas questioning the candidacy of Manogaran and Ramli, saying that they were not voters in the constituency.

Azhar said the matter did not come under the jurisdiction of the EC but the policy-makers.

“In fact, that is a policy matter and does not come under the purview of the EC. I leave it to the policy-makers to determine whether to make amendments or otherwise,” he said.