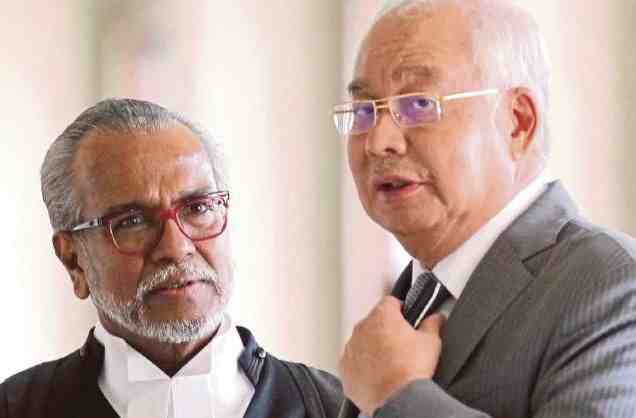 KUALA LUMPUR — Towards the end of the prosecution’s case in regard to Datuk Seri Najib Tun Razak’s SRC International Sdn Bhd trial, it was disclosed that the accused, not fugitive businessman Low Taek Jho or Jho Low benefited from the misappropriation of SRC’s funds.

Following are brief recaps of the evidence adduced by the prosecution’s last witness before Judge Mohd Nazlan Mohd Ghazali on Aug 19 to Aug 23:

“I also did not investigate how she could release the article on July 2, 2015,” he said during cross-examination by lawyer Harvinderjit Singh.

The BBM conversations between Yu and Jho Low were related to entry and withdrawal transactions from the former prime minister’s bank accounts.

Harvinderjit: Overall, the misappropriation of SRC funds is by Jho Low and his allies?

Harvinderjit: Generally, based on the transcript of the Black Berry Message (BBM) , I suggest Datuk Seri Najib was not involved in any withdrawals of funds from SRC?

Rosli: Jho Low has no interest in this case, only Najib has interest.

Harvinderjit: Apart from that, images that were sent to several countries also stated Jho Low and Nik Faisal as suspects in embezzlement of SRC funds?

Muhammad Shafee: I put it to you that Nik Faisal did not implicate Datuk Seri Najib in both his statements.

Farhan:  Datuk Seri Najib, in his statement to MACC said the purchase of jewellery items at De Grisogono, Italy, using his credit cards, was for gifts to foreign leaders?

Rosli: That was what he (Najib) claimed.

De Grisogono is a Swiss luxury jewellery boutique set up in Geneva, Switzerland in 1993 by an Italian black diamond expert from Lebanon, Fawaz Gruosi.

Najib, 66, is facing three counts of criminal breach of trust, one count of abusing his position and three counts of money laundering involving SRC funds amounting to RM42 million.

The prosecution will close its case on Tuesday.