He said the two witnesses were the Assistant Director of the Planning and Management Sector, District Education Office (Complaint/Investigation) from the Negeri Sembilan Education Department and the SJKC Headmaster.

“The recording of statements from the other witnesses would be done based on the appointments that had been arranged,” he said in a statement early this morning.

On Dec 6, the Education Ministry said in a statement that the ministry would not compromise with anyone who breached regulations involving the Malaysian Constitution whether directly or otherwise.

The video recording lasting one minute and 23 seconds which showed students singing the Negaraku in the Mandarin language was allegedly recorded on Sept 26, 2018 at a SJKC school in Seremban, Negeri Sembilan.

In the incident concerned, the national anthem sung in the Arabic language was detected to have occurred in a national school in Gurun, Kedah.

“The recording of statements of witnesses who were identified had been carried out yesterday involving the Headmaster, District Education Officer of Kuala Muda, Kedah as well as the suspect who recorded and uploaded the video in the Facebook.

“So far, the police had received eight reports concerning the same issue and both cases were being investigated under Section 8(3) of the National Anthem Act 1968 and Section 233 of the Communications and Multimedia Act 1998,” he said.

On Dec 7, a recording of the Negaraku sung by a group of youths in a class believed to be from a religious school and primary school each lasting between one minute and two seconds up to one minute and 28 seconds.

On the case concerning the video that went viral regarding the Jalur Gemilang star that broke into five and the 11-line red/white stripes, Huzir said police had received 31 reports on the matter and as a result, statements had been taken from five witnesses comprising the complainant, organiser, executive secretary of the association, company director and the vendor of the information technology.

The equipment used had also been seized. 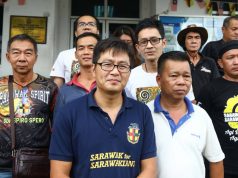