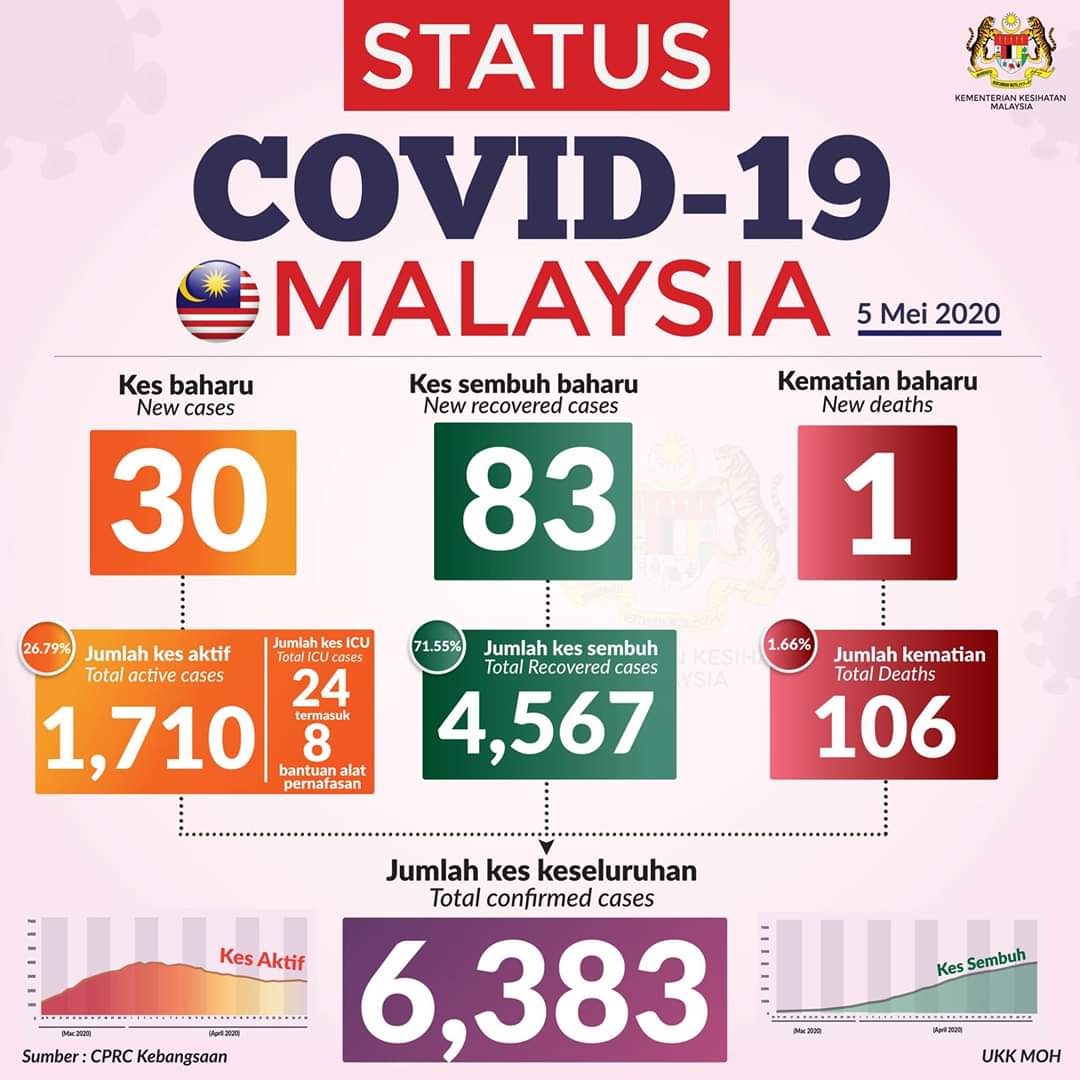 PUTRAJAYA — The Ministry of Health (MOH) today confirmed 30 new COVID-19 positive cases, the lowest number recorded in a day since the Movement Control Order (MCO) was implemented on March 18.

Health director-general Datuk Dr Noor Hisham Abdullah said this brought the total number of cases in the country to date, to 6,383.

He added that 83 COVID-19 patients had recovered and allowed to go home, bringing the cumulative number to 4,567, which is 71.55 per cent of the total number of cases.

“None of the 30 new cases reported were imported. This means these 30 cases were due to local transmission, of which 21 were detected from clusters and localities under the Enhanced Movement Control Order,” he said during the daily press conference on COVID-19  here.

Meanwhile, Dr Noor Hisham said another patient was reported to have succumbed to the disease today, taking the death toll to 106.

Dr Noor Hisham said the number of COVID-19 active infectivity cases was 1,710, and they were being treated in isolation.

“To date, 24 COVID-19 positive cases are being treated in the Intensive Care Unit (ICU). Of these, eight cases require respiratory assistance,” he said.

According to him, 180 COVID-19 positive cases were recorded in the Pusat Bandar Utara cluster and around the Kuala Lumpur Wholesale Market (PBKL), involving one death.

“One hundred cases are within the Enhanced Movement Control Order (EMCO) area, and 80 cases have been detected outside the EMCO area. The total includes traders and non-traders, such as family members of traders, visitors and those who have had close contact with this cluster,” he said, adding that the PBKL cluster was also found to be linked to the Seri Petaling Tabligh gathering in Kuala Lumpur.

Of the 80 cases detected outside the PBKL EMCO area, 29 cases were discovered via screenings conducted at four public markets, namely the Seremban and Bahau main markets in Negeri Sembilan; and the markets at Jalan Othman and Taman Megah in Petaling Jaya, Selangor.

In the meantime, Dr Noor Hisham stressed that traders or wholesalers who wished to enter the Kuala Lumpur Wholesale Market would need to undergo COVID-19 screening tests.

“For those who do not have symptoms and not had their samples taken, they should continuously monitor their health using the Home Assessment Tool and immediately notify the nearest District Health Office in the event a symptom shows up,” he added.