KUALA LUMPUR- Former Deputy Prime Minister had given  92 cheques, totalling RM76,967,355.41, within two years to a law firm for the funds to be kept in Yayasan Al-Falah’s account to be used for religious and charitable purposes, the High Court was told today.

B. Muralidharan, 62, a partner at Messrs Lewis & Co told the court that  all the cheques were banked into thge clients’ account of the legal firm.

“I received the cheques between May 20, 2016 and April 9, 2018 from Ahmad Zahid at Ahmad Zahid’s house in Country Height, Kajang, his office and our firm in Bangsar.

“The cheques were in particular for the constructions of a mosque and a Tahfiz school in Bagan Datuk, Perak (Ahmad Zahid’s constituency). I was told the moment the cheques were cleared to put the money in fixed deposits so that interest can be earned,” he added.

He said the fixed deposit accounts were placed under Yayasan Al-Falah, a charity foundation belonging to Ahmad Zahid’s family in which his younger brother,  Datuk Seri Mohamad Nasaee Ahmad Tarmizi, was the chairman and trustee.

Muralidharan said this during examination-in-chief by deputy public prosecutor Datuk Raja Rozela Raja Toran on the 33rd day of trial of the Bagan Datuk Member of Parliament, who is facing criminal breach of trust, corruption and money laundering charges involving funds belonging to Yayasan Akalbudi.

Based on Muralidharan’s witness statement, the cheques were issued by several companies and individuals.

To a question on the arrangement between him and Ahmad Zahid regarding the cheques, Muralidharan said he was told by Ahmad Zahid, that were funds for religious and charitable purposes.

“I further note that the Yayasan Al-Falah file also contained a ledger detailing the transactions relating to the aforesaid 92 cheques… My clerk, Ms Sothilechmy was instructed to maintain and update the ledger for auditing purposes,” he added.

To Raja Rozela’s question whether Ahmad Zahid  was a trustee of Yayasan Al-Falah, Muralidharan said  “no”.

The 87th prosecution witness said he was appointed to represent Yayasan Al-Falah when he received the first batch of cheques around 2016 but there were no documents stating his appointment as he was doing pro bono work for the foundation.

“It is a practice of the firm to work on pro bono basis for charitable work and this included for temples and churches. We did no legal work (for the foundation). Just collect cheques and placed as stakeholders,” he said. 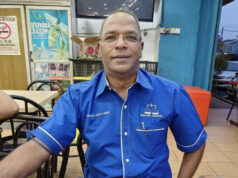 “Appointment of NGO leader might be an insult to Indians” – Ramasamy