Twenty Eight Tamil schools in the country with 10 and less students might face the possibility of being closed down. If this happens, the number of Tamil schools will shrink to 499 schools.

Out of the 28 Tamil schools with less number of students 14 are in the state of Perak. 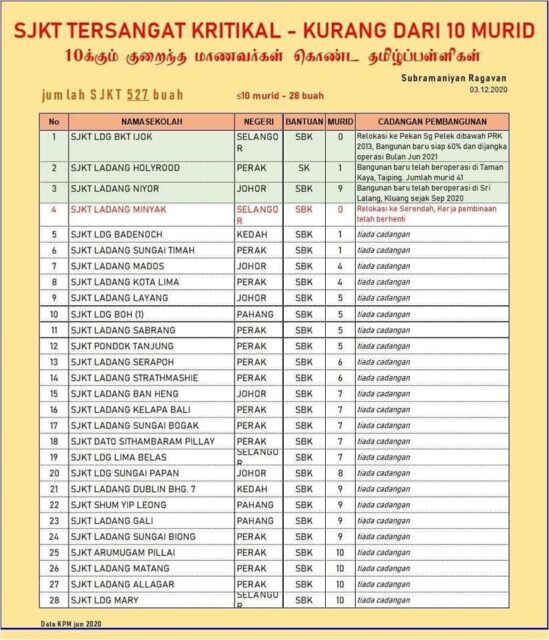 Here, I am referring to Chinese and Tamil schools that are popular in their respective ethnic communities rather than the national schools.

The education system in Malaysia gives one the impression that these different medium school schools are competing with one another.

The answer is yes and no.

Since it is the choice of parents to select the schools, there is an option either to send them to vernacular or national schools.

There is another option for parents to send their children to private international schools with the choice of curriculum.

The formalisation of vernacular schools was the outcome of an ethnic bargain that was hatched between the non-Malays and Malays repressed in the three political parties that formed the coalition just before political independence.

The ethnic bargain ensued that Bahasa Malaysia would be the national language and the non-Malays would be permitted the usage of their mother tongue. The vernacular schools stemmed from this ethnic bargain and compromise.

The existence of the vernacular schools were fraught with political and ethnic tension from the beginning.

With political developments associated with rise of ethnic nationalism especially Malay nationalism there were calls for the abolition of vernacular schools to be replaced by a reformed national schools system that would make Chinese and Tamil languages as mandatory.

This system could have been introduced although accepted in some circles failed to make an impact.

Asking for single system of education only managed to speed up ethnic or language nationalism that served to strengthen the vernacular schools.

As the national schools system came to be identified more and more with interests of Malays and their religion, the enrollment in vernacular schools increased from their respective communities.

As it stands, majority from the Chinese and Indian communities attend their respective vernacular schools rather than national schools.

In fact, even Malay parents are sending their children to Chinese schools to acquire knowledge of Mandarin and skills in science subjects.

I think nearly 18 to 20 percent of students in Chinese schools come from the Malay community.

Non-Malays prefer their vernacular schools not mainly due to ethnic nationalism but because of the deteriorating academic standards in national schools.

While the quality of academic standard and teaching might be better in national schools, but with exceptions.

However, this has not prevented challenges to the existence and continuation of vernacular schools in the country.

There are still demands for the closure of these schools as they are deemed against ethnic integration and national unity.

Such arguments have no substance but find ready acceptance among Malays for ethnic and political reasons.

With the rise in both ethnic nationalism and religious extremism, vernacular schools have become targets of attack.

Recently, the constitutionality of the vernacular schools have been challenged in the court of law.

While ethnic nationalism might fuel for the dogged preservation and continuation of the vernacular schools, these schools are not without other dangers.

It was brought to my attention that about 28 Tamil schools, half of them in Perak and the rest in Johore, Selangor, Kedah and other states have student enrollment about 10 and less.

There might not be that many Chinese schools suffering the problem of low enrollment but there are.

The problem of low enrollment might be higher in Tamil schools. There few Tamil schools where teachers are more than students.

If the phenomenon of low enrollment persists in Tamil schools and to a limited extent in Chinese schools, then these schools face the dim prospect of being closed down.

It is not that this problem of low enrollment cannot be addressed. Many of these schools in this category are in a poor shape. Nothing has been done to spruce these school, improving the infrastructure, putting in new facilities and others.

It has come to situation where parents make conscious choice, ethnic nationalism notwithstanding, of not sending their children to these schools with poor infrastructure.
Anyway, why should they?

In Penang, the state government being fully aware of the problem of low enrollment has improved the infrastructure of these schools resulting in the dramatic intake of student intake.

Ladang Sempah Tamil Primary School in Nibong Tebal, Penang, had only 19 students.
However, within a year or so with a generous grant from the state government for infrastructure and new classrooms, the student population went to 90 students.

This is one example and there others not only in Penang but other states where financial assistance can turn around the condition of schools.

Penang and Selangor might give yearly financial grants for the improvement of Tamil schools but what about other states.

It is the fundamental neglect of Tamil schools the main reason as to why there is drop in the intake.

The decline of enrollment in Tamil schools can be controlled if the governments at both the state and federal levels think of improving the financial contribution to Tamil schools.

I understand that states like Kedah, Perak, Johore and other states hardly make contributions to Tamil schools.

Chinese schools might be sustained by contributions from their community, but Tamil schools depend solely on governments, both state and federal.

Even if vernacular schools are forced to close down, it is still not too late to save the schools.

The permits of licenses of the closed schools can be used to build new schools in areas of high Indian concentration.

The electoral constituency of Bagan Dalam, Penang, with a sizeable Indian population is badly in need of a Tamil school.

If the federal government desires, it could transfer the license of school that has been closed down or about to close down to be transferred to the new Tamil school in this district.

It was brought to my notice that a Chinese school that was closed down in the district of Sri Manjung, Perak, was transferred to a school in Puchong. I am sure there are other schools both Tamil and Chinese that saw a new beginning with transferred licenses from other schools that were forced to close down.

The biggest tragedy of the Indian community is that it lost more 500 schools over the years, under the BN government.

Today there are slightly more than 500 Tamil schools located throughout the country.
If the MIC had some imaginative thinking then, the Indian community could have saved some of the licenses of the closed schools for the new ones.

This system due to opposition from the community failed to take off.

Whatever said and done, the MIC must bear the responsibility of reduction of Tamil schools in the country.

Thus, the danger to vernacular schools seem to lie in the financial neglect and not so much due to competing ethnic nationalism.