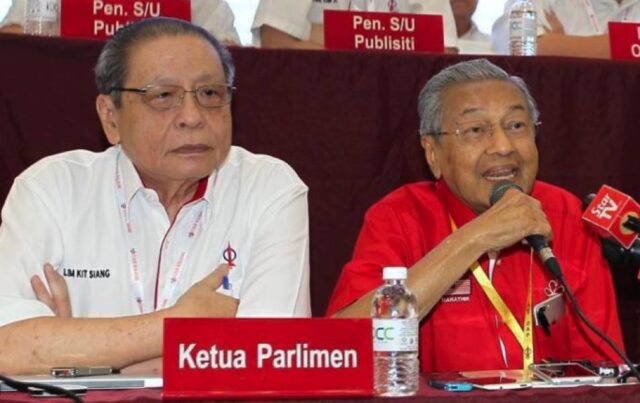 In his interview with China Press, former Prime Minister Tun Dr. Mahathir Mohamad said: “I had helped the opposition to win (in GE14) because I brought in Malay support. You know DAP, which could never get more than 18 seats, get 42 seats because of the Malay support I brought in”.

Although the DAP had been demonised by lies, falsehoods and fake news as anti-Malay, anti-Islam and anti-Malay Rulers for the past five decades, the DAP had right from its formation in 1966 been committed to a multi-racial, multi-lingual, multi-religious and multi-cultural Malaysian objective and had never been against any race or religion or against the monarchical system in Malaysia.

We want every person in Malaysia, whether Malay, Chinese, Indian, Kadazan or Iban to have a Malaysian consciousness, identity and objective.

DAP created history in Malaysia when a DAP leader went to jail and lost his qualification as a Member of Parliament for the dignity and honour of an underaged Malay girl – Lim Guan Eng, when he was MP for Kota Melaka.

In 1969, I was asked what the DAP stood for and I reduced the DAP’s objectives to five points, viz:

(i) That Malaysia is a multi-racial, multilingual and multi-cultural society and that a viable Malaysian nation can only be formed if all the races and groups in the country are given an equal stake under the Malaysian sun.

(ii) That in a multi-racial society like Malaysia, violence and any ideology of force, as advocated by the Communist Party of Malaya, could only lead to the disintegration of the country because it would quickly degenerate into a racial conflict. Force and violence in all forms must be deplored.

(iii) That in a multi-racial Malaysian society, if any racial group feels it is backward, either educationally, economically, culturally, linguistically or politically, then racial antagonism will be created. Every attempt must be made to remove these imbalances between the races and groups.

(iv) That poverty is not a communal problem. It is a socio-economic problem and to regard poverty as a racial problem is to increase racial antagonism in the country.

DAP has remained true to these five principles in the last 55 years and this is why the DAP will adhere to these principle and will not work with kleptocratic UMNO leaders, which have specifically expanded from two to three persons in the public domain.

With the diabolical campaign of misinformation, lies, falsehoods and fake news, which were intensified in the last 12 years since 2008, that the DAP was anti-Malay, anti-Islam and anti-Malay Rulers, we faced an uphill battle to win over the support of the Malays, but we have never given up this challenge.

In his interview, UMNO veteran Tengku Razaleigh revived Burhanudin al-Helmy’s idea to give “Malay citizenship” to everyone regardless of race.

As I said in my 2021 New Year Message yesterday, Malaysians must learn the lessons why we are straggling behind other countries. We must forge ahead with a new national consensus to return to the quest of a world-class great nation and escape the fate and ignominy of a kleptocracy, kakistocracy and a failed state.

Let us move forward with the times.

Only then can we achieve a Bangsa Malaysia as envisioned in the failed Vision 2020.