Sorry, Prime Minister Muhyiddin Yassin, Emergency is all about politics and nothing to do with that containment of Covid-19 pandemic.

Who are you trying to fool?

Shame on you to describe without any sense of guilt that the PN government is a legitimate one.

I would like to know from where or from whom your government that squeezed itself through the backdoor obtained its legitimacy?

You abused your power in the name of containing the pandemic to convince the Agung to push through the emergency proclamation.

Remember you tried in the first few months but failed. Then the rulers were not convinced that you had the sincerity in wanting the emergency. 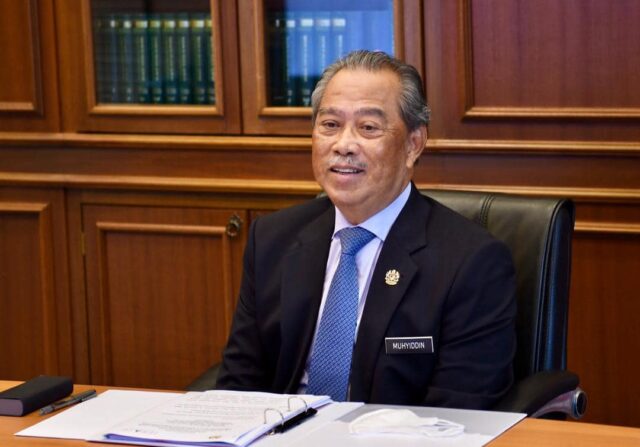 However, your government’s failure to contain the pandemic was the reason why the Agung gave your the benefit of the doubt.

It was only the arrival of the vaccines that brought about some sort of relief to the general population but the battle against the pandemic is far from over.

There is sense of deja vu, the real reason for the proclamation of the emergency has become clear.

It was meant to subdue the rakyat so that you and Azmin Mohammed Ali, the other partner in the “crime” could use the emergency induced atmosphere to weaken the opposition so that you can win the numbers came if election is declared at your convince.
Don’t invoke God, what you are doing is anything but the path of the Almighty.

Again you have no shame or morality to elicit the crossover of the opposition members of parliament.

You take great pride in enticing the crossovers, perhaps more will follow. Don’t forget, these frogs have no loyalty or principles, how long will it take them to do number on you.

In this respect, the emergency is meant to buy you time, buy members of parliament, increase the numbers in the PN coalition as a prelude to a general election.

Once you have your numbers, hook or crook, then emergency might have served its purpose. But you shamelessly say that emergency has nothing to do with politics.

But I say that it has all to do with politics.

In other words, it was meant meant for the survival of the beleaguered PN government. The whole point of the emergency was to split the unprincipled Umno, so that Bersatu can claim the mantle of Malay leadership.

Under the conditions of emergency and the fear of being prosecuted, there is likelihood of the emergence of Umno turncoats.

So much for the champions of race and religion.

Under the weight of colossal corruption, the concerns of race and religion will vanish in thin air as the scramble for survival becomes the real agenda.

So, Mr Prime Minister, can you defend that emergency has nothing to do with politics.
I say categorically that it was meant not to combat the Covid-19 pandemic, but was meant to shore up the illegal backdoor PN government.

The time frame of August 1, 2021, was required to settle the numbers question.
Of course, needless to say millions have been stashed to buy over and elicit elected representatives from the opposition to crossover.

Immaterial of political affiliation, Malaysians want a decent and honest prime minister. Definitely not the present one.

I really hope that Muhyiddin will have the minimal decency not to repeat a lie.
I don’t think repeating an untruth many times, truth will be established.