The fault lies in us not in the logo. It has been decided in the PH’s presidententail council that PKR will it’s own logo while DAP and Amanah will stick with the coalition’s logo in facing the Johore state elections.

However, whether the change in the logo of PKR will make any difference in the coming elections is yet to be seen.

PKR has decided to abandoned the PH’s logo in preference for its own logo.  It is argued that that party’s use of its own logo might make it easier for the party to attract rural crowd especially in competition with Umno and Bersatu. 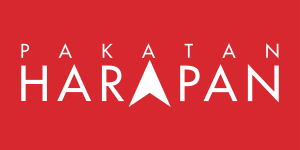 The fact that the party virtually collapsed in the Melaka and Sarawak state elections is attributed to the non-recognisable coalition’s logo. It might be true and might not be true.

Why political parties win and lose in elections are based on multitude of factors not necessarily the use of logo. Logo might have some impact but must be seen in relation to the choice of candidates, political leadership and issues at hand and how the general public view the parties generally.

A party’s log cannot be seen in isolation but in relationship to other variables. It is wrong or superficial for some PKR leaders to think that the source of the problem is in the use of the coalition’s logo.

Discussions about why certain parties or the coalition fail to make their mark is hardly about inappropriateness of logo. It is more about the caliber of the leadership and public support.

Placing undue weight on logo might be counter-productive as the real issues that might affect the performance of the parties might be pushed to the background.

PH coalition partners, DAP and Amanah have decided to stick to the coalition’s logo.

I think that is a right move keeping in mind the need for alternative politics in the country.

Of course, there have been requests for the DAP to go back in using the party’s logo, a logo that is easily identifiable by its supporters, especially in the semi-rural areas.

I am sure, there have been similar requests for Amanah to go back to its logo.

PKR is the leading multi-racial party in the PH coalition. It’s president Anwar Ibrahim is slated to be the choice of being the next prime minister, if the coalition wins the next general elections.

PKR leaders might have all the good reasons, strategic or tactical, as to why they prefer to fall back on the party’s logo in coming Johore state elections.

But then what are the implications of the use of such logo for the emergence of a new brand of alternative politics?

How can PH as whole broaden the coalition to face Umno/BN in the next general elections if the party cannot even use the coalition’s logo in the state by-elections.

It is possible to move from one logo to another, but what are the broader implications of such a move.

Why was the common logo agreed in the first place?

The coalition partners could have stuck to their respective logo without going for a common one.

The problem was not the logo, but the leadership that was used and manipulated by none other than the former prime minister Mahathir Mohammed.

Why should PKR leaders blame the logo rather than taking the blame themselves.

PH leadership must take the blame for their close and parasitic relationship with Mahathir.

I find it highly preposterous that some PKR leaders can use such arguments to abandon the PH’s logo.

Abandoning the common and agreed logo does not augur well for alternative politics in the country.

It is just not moving from one logo to another logo and back, it is about Malaysians having faith in PH as symbolised by the logo.