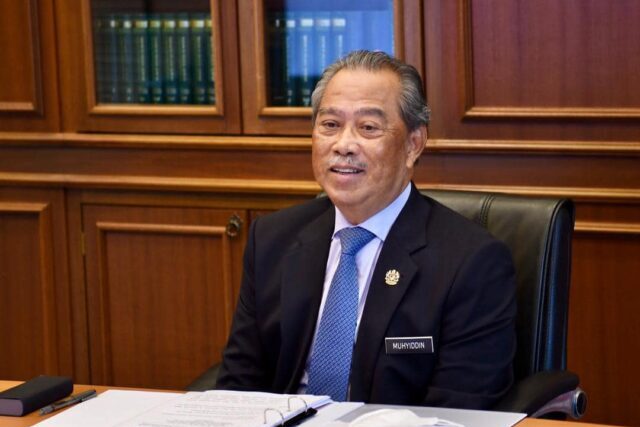 Former prime minister Muhyiddin Yassin seems surprised and annoyed that some Bersatu leaders in Johore might be quitting the party. Bersatu’s strongman in Johore, Mazlan Bujang has resigned from the party.

Chances are that he might be joining Umno to support candidate former Johore Menteri Besar Hasni Mohammed as the next possible state leader.

The Johore-state elections are slated to be held in March 2022. There is so much porosity between Umno and Bersatu, the two-way traffic is nothing unusual. Ideologically there is hardly difference between both the parties.

Umno has a long history and it might be credited for number of things for the wrong reasons, but Bersatu was formed by a breakaway faction of Umno just before the last general elections in 2018.

The leadership was provided by both the former prime ministers, Mahathir Mohammed and Muhyiddin. Both leaders fell apart after the infamous Sheraton Move, the former ultimately forming Parti Pejuang Tanah Air.

Muhyiddin could not hold the position of prime minister for too long as he not only alienated the Yang Dipertuan Agung but faced the prospect of losing the majority in the Parliament. For Muhyiddin, it simple primitive logic.

It was alright be him to betray Umno and the PH coalition by the Sheraton backdoor move, but is unthinkable for others to betray Bersatu, like what Mazlan has done.
Is Muhyiddin telling than he can betray Umno and PH, but not others?

If Mazlan wants to resign from Bersatu, he is merely expressing his wish to join the party that he originally came from. He is as opportunistic as other Bersatu leaders. Maybe he finds that he has future in Umno rather than the sinking Bersatu.

What is so significant about the timing of Mazlan’s resignation? What does it matter whether he resigns before the dissolution of the Johore state assembly or after the announcement?

The timing might be significant to Muhyiddin, but to frogs like Mazlan and others, anytime is a good time. Of course, one of the biggest frogs in the country is none other than Muhyiddin himself. He left Umno to join Bersatu before joining the newly formed coalition of PH.

He betrayed the PH government only after being in federal power for 22 months. It was just matter of time before the boomerang which he threw came back to haunt him.

The holier than thou Muhyiddin should be the last person on earth to talk about betrayals.
He should look at himself in the mirror, perhaps ask the mirror as to who is the notorious frog in the country.

The mirror’s reply will be obvious.

Unfortunately, Muhyiddin is holding on to party like Bersatu that might be facing extinction in the wake of the onslaught by Umno. Some Bersatu members like Mazlan and others are quick to realise that the party ship is fast sinking.

It is better for him to quit Bersatu at the opportune moment so that he could have an opportunity to contest, win and be considered for an executive council post in the new state government.

As for Muhyiddin, he doesn’t realise that Bersatu is sinking. Such is the predicament of the captain of the ship called Bersatu.

After the ship has sunk, Muhyiddin and those closest to him might be considered as the last of the Mohican.