KUALA LUMPUR, July 25- The Congress of Unions of Employees in the Public and Civil Services (CUEPACS) has expressed its thanks to the government for the special cash support of RM500 and RM250 to civil servants and pensioners respectively, in conjunction with Aidilfitri.

Its president Datuk Omar Osman said the gesture was proof that the government appreciated its employees’ dedication and contribution to the country.

“The financial support will surely bring cheer to government servants particularly those in the middle income group in their preparation for Aidilfitri,” he said when contacted by Bernama.

Prime Minister Datuk Seri Najib Tun Razak in a statement today announced the special cash payout, which would be disbursed on July 31 for civil servants between Grade 1 and Grade 54.

Omar also hoped the government would consider a bonus for civil servants in the national budget 2014.

He said the support would help to ease the retirees’ burden against the high cost of goods. 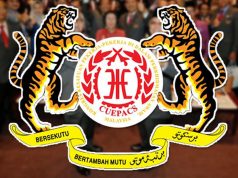