ALOR SETAR, Sept 6 – Wanita UMNO has never hinderd Puteri members from contesting any post in the movement, in the coming party elections in October.

Its chief Datuk Seri Shahrizat Abdul Jalil said the movement instead welcomed former Puteri UMNO members to contest any post in the Wanita wing if they were interested.

“Datuk Habibah Mohd Yusuf, who is now the Tanjung Karang UMNO division Wanita head is a former Puteri exco member, and I myself had appointed Noraslina Zainal Abidin, the former Johor Puteri UMNO head, as Wanita UMNO treasurer. These are among the top posts in Wanita.

“Wanita UMNO can be regarded as a mother (to Puteri UMNO) and I as a mother, wish that we do what is good, that our friendship remains. I am happy to see Puteri UMNO members struggling together with us in the party,” she told reporters when met at the Kedah Wanita UMNO Aidilfitri open house at Seri Mentaloon, in Alor Setar, Friday.

Meanwhile, Rosnah who has offered to contest a Wanita executive committee (exco) post in the party elections this October, said Wanita UMNO had never rejected any Puteri leader who offered to serve in Wanita UMNO, as it was a good platform to reach greater political maturity.

Later, at the Perlis UMNO Wanita’s Aidilfitri open house in KANGAR, Shahrizat said she hoped that she would be returned as Wanita UMNO chief at UMNO’s polls, saying she wanted to bring Malaysian women to greater heights. 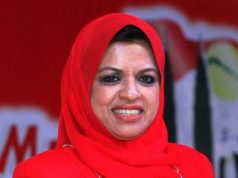