KUALA LUMPUR sept 28- The people can expect no fuel price hike in the near future as the adjustment is just too recent, says an economist with Alliance Research, Manokaran Mottain.

“The people are still in the midst of absorbing it (the fuel price hike),” said Manokaran, who is also the National Economic Action Council (NEAC) member, to Bernama when asked on more fuel subsidy cut in the near term.

“Any subsidy rationalisation will only be decided when it is really necessary,” he said.

Speculations on another fuel price increase went viral on the social media over the past days saying that the government is cutting more subsidies particularly for fuel, thus resulting on higher RON95 petrol and diesel prices.

A screen shot of Bernama’s website “seemed to be” the announcement on the price hike was circulated through the social media today.

It was actually the Sept 2 announcement on the subsidy rationalisation, which saw RON95 petrol and diesel prices increased by 20 sen effective Tuesday (Sept 3) midnight.

The screen shot in fact had dotted the date to “Monday midnight” and virally circulated to the mass public.

Following the recent rationalisation, the government will save about RM1.1 billion this year.

The government has allocated a staggering RM24.8 billion for fuel subsidy this year. 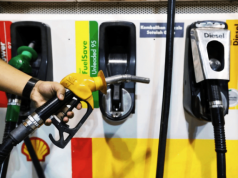