GEORGE TOWN, March 9- Deputy Prime Minister Tan Sri Muhyiddin Yassin(pic) today urged the people to support the government in the defence of the nation so as to avert incidents such as the Sulu militant intrusion in Sabah.  He said that though the nation had been peaceful and safe all this while, the people could not take things lightly as the enemy was bent on creating havoc in the country.

“In the (Lahad Datu) incident, our heroes (security forces) were killed. There is price to pay for peace. It was something unexpected.

“I want the people to be with the government in the defence of the nation so that the enemy cannot trespass into our country,” he said at a breakfast meeting with about 1,000 people in Kampung Nelayan, Teluk Kumbar, near here.

Muhyiddin said the situation in Lahad Datu was under control, with the security forces having launched an offensive against the Sulu militants.

“What is important is unity. We may be different in appearance but our desire is one – to have unity to ensure peace and prosperity in the country.

“We have to maintain unity in line with the 1Malaysia concept so that such incidents as the Lahad Datu intrusion do not recur. Our enemies want to create havoc so that they can penetrate the country easily,” he said.

Muhyiddin also said that 1Malaysia was not a mere slogan but an assurance for the people to live a comfortable, prosperous and peaceful life. The country’s leaders always strived to help the people to ensure that they had a better life in the future, he said, adding that life today was much better than 10 or 20 years ago. The deputy prime minister also announced an allocation of RM500,000 to upgrade the fishermen’s jetty in Kampung Nelayan. 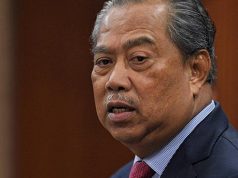