Washington – Republican presidential candidate Donald Trump was recorded making lewd references to women’s genitalia and bragging about his sexual prowess in a video obtained by the Washington Post and broadcast Friday on US media outlets.

Trump uncharacteristically apologized for the comments in a brief statement issued by his campaign in which he referred to the comments as “locker room banter” from a private conversation in 2005.

Trump apparently was unaware that the conversation was being recorded while on his way to a television studio where he was to be a guest on a soap opera. He was accompanied on the bus by Billy Bush, the host of a celebrity gossip television show.

The recording begins with Trump bragging that he had “moved” on a woman “very heavily,” saying “I did try and fuck her,” knowing she was married.

He admits he was rebuffed despite trying to ply her by taking her furniture shopping. He then refers to her as having totally changed her look with “big phony tits.”

The woman is not identified in the recording.

Trump, who had recently married his third wife Melania at the time, then went on to discuss his general approach to picking up women after spotting the female actress from the soap opera, Arianne Zucker, outside the bus. 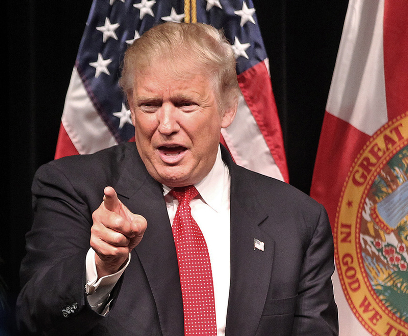 Republican presidential candidate Donald Trump greets the small crowd at the Miami Dade College Koubek Center in a town hall style meeting on September 27, 2016 in Miami. Trump on Friday apologized for lewd comments he made 11 years ago referring to women’s body parts and his attempts to get women to sleep with him. (Credit Image: © C.M. Guerrero/TNS via ZUMA Wire)

He is heard saying he needs breath mints because “I’m automatically attracted to beautiful women … I just start kissing them,” adding “when you are a star you can do anything – grab them by the pussy.”

Trump said in his statement that he apologized to anyone who was offended. He also said former president Bill Clinton had “said far worse to me on the golf course – not even close.”

The recording comes to light at a critical time for Trump just two days before he faces his Democratic opponent Hillary Clinton in the second debate. It also stands to further lower his ratings among women voters – a group he is already struggling to win over.

It also dilutes his efforts to make a campaign issue out of Clinton’s marriage and the sex scandal her husband was impeached over in 1998.

He recently said in a New York Times interview his opponent was “married to the single greatest abuser of women in the history of politics.”

The recording released Friday shows Trump and Bush emerging from the bus with an entourage of men who appear to be television staging and production workers.

After they are met by Zucker the tone of the conversation changes. Bush then suggests Zucker “have a little hug for the Donald. He just got off the bus.”