He is undergoing treatment at Delhi-based All India Institute of Medical Sciences (AIIMS), according to Xinhua news agency.

Confirming his ailment, Shah tweeted Thursday: “I am down with swine flu, for which treatment is going on. I will be soon normal with God’s grace and love of you all.”

Swine flu has claimed as many as eight human lives in the past four months in the northern state of Haryana, adjoining Delhi, mainly in the districts of Hisar, Bhiwani and Faridabad. Six other cases showing similar symptoms have yet to be confirmed, pending medical reports.

Besides, as many as 168 people have been tested positive for H1N1 influenza during this period, reported the English daily The Times of India on Thursday.

According to the newspaper, the total number of deaths due to H1N1 influenza during 2018-19 in Haryana alone is 14.

The Hisar district is said to be worst hit, with seven deaths and 71 cases, while Bhiwani and Faridabad districts reported 37 and 21 cases, respectively.

Haryana’s Gurgaon district, neighbouring Delhi, has reported four confirmed cases of swine flu up till Jan 16, according to the newspaper report. 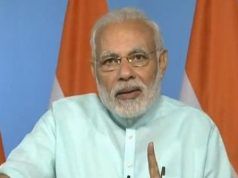 Some BJP allies don’t want Modi as next PM – Minister