PUTRAJAYA — The Malaysian film industry is in for better times following the signing of a co-production agreement between Malaysia and Australia in Sydney yesterday. Communications and Multimedia Minister Gobind Singh Deo said that with the signing of the agreement, Malaysian productions will be seen as Australian productions to facilitate penetration of markets of other countries that have signed similar agreements with Australia.

“It will also enable close collaboration which will help in raising quantity and quality of co-productions between the two countries,” Gobind said in a statement here in conjunction with the signing of the agreement.

The agreement was signed by Foreign Minister Datuk Saifuddin Abdullah  and his Australian counterpart Marise Payne.

“This is a good initiative because it will help the Malaysian creative industry in opening up more opportunities and new business spaces for our film industry players with Australia and other related countries in the future,” said Gobind. 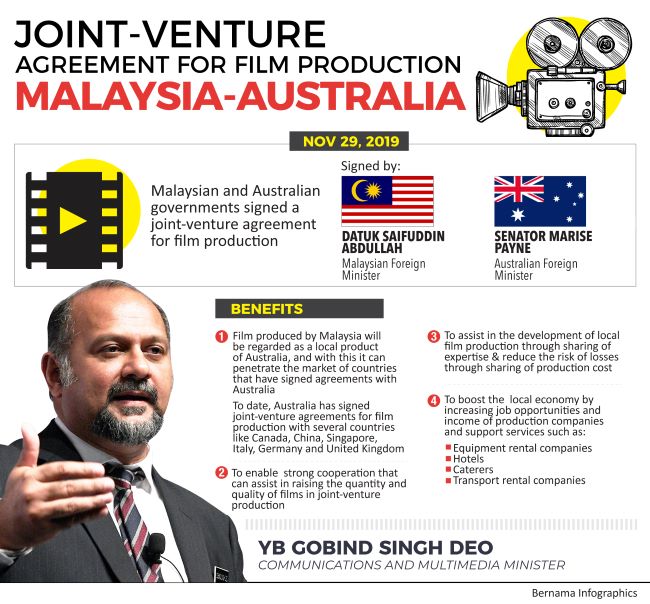 According to him, the discussions on the collaboration was spearheaded by the Communications and Multimedia Ministry (KKMM)  since 2007 but no agreement was reached until the new (Pakatan Harapan) government took over (in 2018).

The PH government took the steps needed to make the initiative a success, he said.

He noted that apart from helping transfer expertise to local productions, the initiative would also help reduce the risk of losses through sharing cost of production by industry players in both countries.

Gobind said the agreement would also help generate economic growth via increased job opportunities and income for local production houses and supporting services like companies that rent out film-making equipment, the hotel and catering industries and transport rental companies.

“It will also benefit other industries that are involved directly or indirectly with our nation’s film industry,” he said.

Gobind said the agreement would also lead to cultural and creativity exchanges between both countries  as well as provide exposure to Malaysian writers.

“They can showcase their talents in terms of acting, direction, script writing, editing and other fields related to the industry. This is expected to happen,” he added.

According to Gobind, the agreement also takes into consideration the existing mechanisms and facilities on taxation between Malaysia and Australia and will involve the aspects of the law, immigration, import and export of equipment for film production and matters pertaining to getting permits to shoot films.

“I hope it will help generate outcomes that are more productive and meaningful for Malaysia and Australia’s film industries,” he added.

Besides Australia, Gobind said KKMM was also now in discussions with several other countries to forge similar collaborations to strengthen the Malaysian film industry at the global level in the future.