Apr 8 , 2013Some elements of Hindraf’s five-year Blueprint have been included into the BN manifesto, but the movement says it wants a proper endorsement of its blueprint to uplift poor and marginalised Indians.

“The BN has incorporated some elements of the blueprint, but it is just a promise.”We would like to apply the same criteria (to everyone), we are saying we want an endorsement (of Hindraf’s blueprint),” Hindraf national adviser N Ganesan (right) said when contacted.

However, Ganesan said Hindraf would only give its full comment in the next few days, once it has properly studied the BN manifesto.

“We haven’t had time yet. We will be studying the document and come up with our impression in a day or so,” he said.

As for the movement’s second meeting with Prime Minister Najib Abdul Razak, Ganesan said it had been delayed due to the dissolution of Parliament, but said the Prime Minister’s Department had indicated this would take place soon.

“I cannot say for certain when it will be, but we have informal contacts with them,” he said.

Ganesan said Hindraf was in the midst of discussing the position it would take in the coming general election and would make its declaration when the discussions were completed.

“We are going in-depth and are considering several options, but I do not want to commit to when we will make the announcement. We will do so as soon as we are ready.Asked about Hindraf’s position on the Human Rights Party (HRP), an offshoot of the movement, which plans to contest in the forthcoming general election, Ganesan described it as “a distant relative” that acts independently.

“To us, the Human Rights Party is like any other political party,” he said.

Asked whether Hindraf would be prepared to back HRP candidates in areas where they stand, Ganesan said Hindraf was open to the idea.

“If such a situation presents itself, when there are three-cornered fights, we will support those who are close to our objectives.

“BN and Pakatan have not made clear their stands on our blueprint and our support will be for those who are aligned to us,” he said. 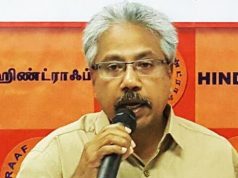 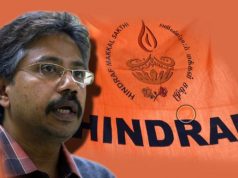