PARIT BUNTAR: The Perak government has established the existence of 200 illegal telecommunications towers throughout the state.

State Communications, Multimedia, NGOs and Information Committee chairman Hasnul Zulkarnain Abd Munaim said the state government will not hesitate take action against owners of such towers who have yet to renew their permit.

“A whitening exercise has been carried out and we found some of the towers had initially applied for permits but did not renew them when their licence expired,” he said.

“We will fine and dismantle the towers if their owners refused to renew their permits,” he warned.

Meanwhile, he said the state government would be providing free wifi to areas around Ar-Ridzuan Mosque in the town centre for the people in February next year.

Hasnul Zulkarnain said the free wife would be installed with the cooperation of a telecommunications company.

“The installation of wifi is a facility to encourage wider use of telecommunication devices among the local community,” he told a media conference after opening Taman Linear Bandar  in Jalan Temenggong here today.

Construction of the RM300,000 recreational park began in June and was completed in November for the benefit of the people.

In his speech, Hasnul Zulkarnain said a handful of residents are still littering even though rubbish bins are provided by the local authorities in the area.

“We could save cost for the local authorities if the people cooperate by keeping their public areas clean,” he said.

In this regard, a cleanliness campaign involving Kerian District Council, the District and Land Office as well as schools would be conducted next year to give Parit Buntar a cleaner image. 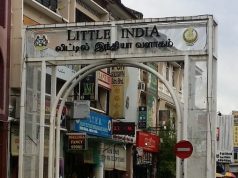