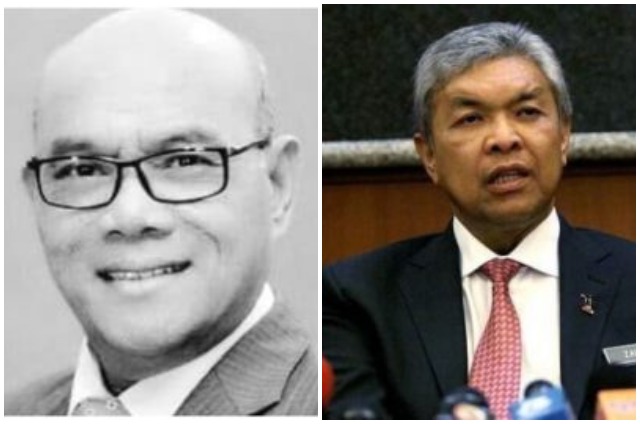 BENTONG : The late Datuk Mohd Khusairi Abdul Talib was a good leader who always cared about the interests of the people regardless of religion and race, said UMNO president Datuk Seri Dr Ahmad Zahid Hamidi.

Ahmad Zahid said the passing of the Slim assemblyman was a great loss to UMNO.

“We accept his death as fate. He was a member of the UMNO Supreme Council and a friend to all regardless of race and religion,” he told Bernama when met at the Bentong Hospital Forensic Centre here today.

Mohd Khusairi, 59, who was also the Tanjung Malim UMNO Division chief, was confirmed to have died of a heart attack at 4.15 pm at the Bentong Hospital after he suddenly fainted while playing golf at the Awana Genting Highlands Golf and Country Resort.

“I was shocked to hear the news of his death. UMNO has lost a good leader, let us pray to Allah to bless his soul and to place him among the blessed,” said the Senior Minister of Defence.

“I know him well because we were together during our years with UMNO Youth and I just met him last week,” he said.

Mohd Khusairi is survived by his wife, Datin Jamilah Nordin, and seven children.

The winner of the Slim state assembly seat for four terms since 2004, had a Bachelor of Arts (Hons) degree from Universiti Kebangsaan Malaysia in Bangi, Selangor and served as a press officer to the Sukau assemblyman in Kinabatangan, Sabah, for three years, beginning 1988.

The native of Perak had also been a sub-editor for several newsletters, including Suara Bersatu of Parti Bersatu Sabah.

In GE14, he retained the Slim state seat with a majority of 2,183 votes against Bersatu candidate Mohd Amran Ibrahim who contested under the PKR ticket, and Muhammad Zulfadli Zainal of PAS.

Slim is one of three state seats within the Tanjung Malim Parliamentary constituency, besides Behrang and Sungkai.