KUCHING: How can Mustafa Ali, who has problems kneeling or even walking down the staircase because of pain, be the person in the sex video, party president Datuk Seri Abdul Hadi Awang said.

Asked at a press conference about the video implicating the party’s vice-president, Hadi said: “The people who made the video does not know Mustafa Ali’s background. For years, he has been in pain. He prays sitting on a chair. He can’t kneel because of pain.”

“The person in the video is an actor.”

“He can’t even go down the stairs and I’ve said he can’t perform his prayers properly without pain. When we saw the video, we were surprised! How can the person who is in so much pain be the person in the video?” he said.

Hadi added that the scandal would not affect PAS’s reputation. “The rakyat knows. It will not affect us negatively, in fact, it will help give us greater support,” he said.

Hadi, here on a two-day visit, was asked about the video featuring a man resembling Mustafa in a compromising position with a woman in a hotel room.

At the press conference, Hadi was also asked about remarks he made three years ago during the Batang Ai by-election when he allegedly quipped that Dayaks did not know the meaning of voting because they were still wearing “cawat” (loincloth).

“That is an old story. It was taken out of context,” Hadi said. “I’m asking the media not to make this a provocative thing. Don’t use it as a campaign matter.” 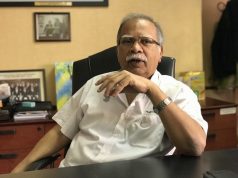 “Hadi has share of the mess that Naik is in” – Ramasamy 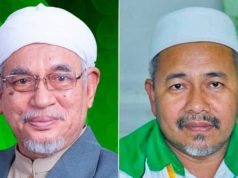