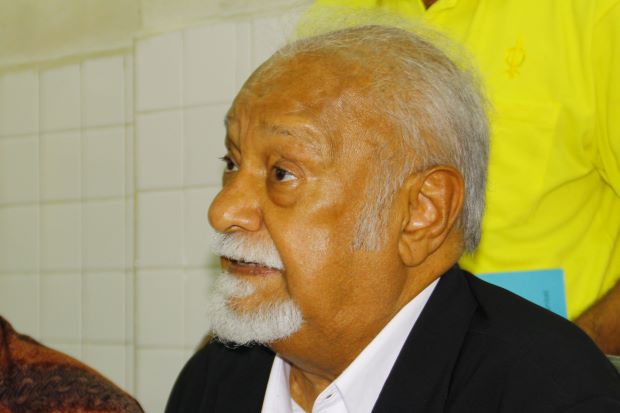 A great honour that on the eve of 55th DAP anniversary, Karpal Singh who was DAP Chairman (2004-2014) and DAP MP (1978 – 2014) posthumously awarded “Datuk Seri Utama” for his services to Malaysians and nation

It is a great honour to the DAP that on the eve of our 55th anniversary, Karpal Singh, who was DAP National Chairman (2004-2014) and DAP MP (1978 – 2014) was posthumously awarded the Darjah Utama Pangkuan Negeri (DUPN) which carries the title “Datuk Seri Utama” in conjunction with the Penang Yang Di-Pertua Negeri Tun Abdul Rahman Abbas’ 82nd birthday celebration for the Tiger of Jelutong’s services to Malaysians and the nation. Karpal’s wife Gurmit Kaur received the award on behalf of her late husband.

DAP has come a long way since our registration by the Registrar of Societies on March 18, 1966.

We have had our many ups and downs, achievements and setbacks, but our goal had remained the same in the past 55 years – to create a world-class great nation out of the diversities of race, language, religion, culture and civilisation which meet in confluence in Malaysia to be “a beacon of light in a difficult and distracted world”.

DAP started as a very young party. I became Secretary-General of DAP when I was 28 while in detention under the infamous Internal Security Act in Muar in 1969.

DAP contested in its first general election, which elected three out of 13 DAP Members of Parliament who were below 30 years old.

Karpal joined the DAP before he was 30 for the life-long battle for national unity, justice, constitutionalism, the rule of law, public integrity, moderation, progress and prosperity for Malaysia.

As I said in tribute of Karpal on the untimely death of the indomitable and indefatigable fighter for justice and democracy in April 2014:

“In his four decades of public life, particularly in law and politics, Karpal has never allowed power and position or his personal trials and tribulations – including detention under the notorious and draconian Internal Security Act under Operation Lalang in 1987 and his persecution under the Sedition Act with the threat of disqualification as elected Member of Parliament – to undermine his commitment to the cause of justice, the rule of law and democracy.

“With Karpal’s death, a light has gone out in Malaysia.

“But the best tribute to the memory of Karpal is the mushrooming of more lights to brighten the Malaysian national landscape of justice, the rule of law and democracy.”

There are not many comrades left among the first generation of DAP leaders who have been able to stand the punishing pace of the DAP mission for the past 55 years – Dr. Chen Man Hin, Fong Kui Lun, Chan Fu King – but DAP had been blessed with many Malaysians, patriotic and idealistic men and women of all races and religions, who rallied to the Malaysian cause: P. Patto, Peter Dason, Lau Dak Kee, Ahmad Nor, Ibrahim Singgeh, Fadzlan Yahya, Ahmad Ton, Chian Heng Kai, Chan Kok Kit, Lim Cho Hock, S. A. Mary, Tan Chooi Sui, Loke Swee Chin among many.

When the DAP started, we wanted to make Malaysia a world-class great nation – and the thought of being a Member of Parliament, State Assemblyman or woman, or forming State or National Governments never entered our minds. Now, many are in politics because they are a route to become MPs or State Assembly representatives.

We must return to the idealism and the passion for justice, freedom, integrity and Malaysian unity, plurality and excellence as in the early days of DAP.

We must learn from the experiences and mistakes of our political struggle, particularly the 22 months of Pakatan Harapan government when we thought we had five years to fulfil our election promises to the people of Malaysia.

The end of the Pakatan Harapan government is a great setback and many Malaysians have lost hope for change and progress for Malaysia.

But we in the DAP must never surrender to despair and despondency, and we must remain in the very forefront of the Dream for a Malaysia to be a world-class great nation and to avoid the abyss of a kleptocracy, kakistocracy and a failed state.

The greatest challenge of the new generation of DAP leaders is to re-inspire Malaysians regardless of race, religion, region or politics, and re-motivate Malaysians in the belief that the nation’s regression, where more and more nations are overtaking us in various worthwhile fields of endeavour, is stoppable and that Malaysia can take our place as a world-class great nation.

March 18 is a double anniversary – as it also marks the first anniversary of the national lockdown as a result of the Covid-19 pandemic.

It is not sufficiently realized that a catastrophe is a great test of a nation’s unity and resilience.

Probably, Malaysia would not have suffered a second wave and undergoing one of the world’s longest third wave of the Covid-19 pandemic if there had not been a Sheraton Move toppling the Pakatan Harapan government in February last year.

Be that as it may, there is no doubt that there is a greater deficit of public trust and confidence in the government in Malaysia than a year ago with the problem of “Dua Darjat” in the implementation of SOPs and the mysterious abscondment of a Deputy Minister to a foreign land.

The task at hand is to reduce and resolve this ballooning of deficit of public trust and confidence.

The Prime Minister’s announcement yesterday of a two-month acceleration of the National Covid-19 Vaccination Campaign to complete in December instead of February 2022 is in the right direction, but with more vaccines coming onto the global market, I would urge the authorities to bring about a greater acceleration of the National Covid-19 Immunisation Programme to complete it by the National Day – Malaysia Day period between August 31 to September 16, 2021 so that normality and restoration of economic recovery and national life can start at an earlier date.

The Cabinet decision to introduce a three-tier system of fines for appeal while retaining the RM10,000 compound fine by the police under the Emergency (Prevention and Control of Infectious Diseases) (Amendment) Ordinance 2021 for any violation of the movement control order (MCO) SOP is most disappointing.

According to de facto Law Minister Takiyuddin Hassan, first-time offenders under the “normal” category – such as not wearing a mask properly – will be fined RM1,500.

As an example of a “severe” category offence, he said patrons of nightclubs would be handed the maximum RM10,000 fine.

Is the Muhyiddin Cabinet trying to kill pubs, nightclubs and restaurants, when all businesses are facing an unprecedented crisis as a result of the Covid-19 pandemic?

The emergency ordinances on violation of MCO and SOPs remain harsh, disproportionate, unconscionable and unjust, especially when the authorities should have realised that the major problem today is to reduce and resolve the deficit of public trust and confidence.

Prime Minister Tan Sri Muhyidin Yassin said in his telecast yesterday that Putrajaya plans to move away from imposing state-wide movement control orders (MCO) to focus on specific localities to reduce the negative impact of movement restrictions on the economy.

But this is not reflected in the deliberations of the Cabinet on the emergency ordinances which impose harsh, disproportionate, unconscionable and unjust penalties on the public.

These emergency ordinances should be suspended in toto and the Cabinet must further reconsider them to remove the harsh, disproportionate, unconscionable and unjust features.