KUALA LUMPUR, Sept 19- The issues of the alleged voting by 40,000 Bangladeshis and power supply disruption at a vote counting centre during the 13th General Election (GE13) will be answered by the government at the next Dewan Rakyat sitting starting this Monday.

Minister in the Prime Minister’s Department Datuk Seri Shahidan Kassim, who is in charge of Parliament, said: “At the sitting this time, we will respond to several issues including the claim that 40,000 Bangladeshis had voted in the GE13.”

The second Dewan Rakyat sitting for the first session of the 13th Parliament from this Monday, will go on for eight days until Oct 3, while the Dewan Negara sitting is scheduled for four days from Oct 7.

Shahidan said the issue of the alleged involvement of Bangladeshi voters and power supply disruption in the GE13 needed to be raised in Parliament to stop the lies to the public.

He also said that two notices on new bills, which he declined to elaborate, had been sent out to the members of Parliament. 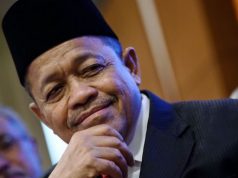