KUALA LUMPUR, Feb 12 – Parti Sosialis Malaysia (PSM) will not contest in the March 23 Kajang by-election, as the left-wing party believes that the PKR-engineered polls are unethical and unnecessary.

PSM chairman Dr Nasir Hashim also said the party, which is PR-friendly, does not wish to split the votes in Kajang, as was the case for the Kota Damansara and Semenyih seats which eventually saw the two seats falling to BN in the 13th general election.

“PSM believes the reason behind this by-election is unacceptable and a bad precedent for democracy. We also believe it’s a waste of the people’s money…

“Thus, PSM does not intend to contest in a by-election that we ourselves are not in agreement with,” Nasir told a press conference at the party headquarters here today.

But he was quick to add that while the party disagreed with the reason PKR gave for orchestrating the by-election, it was not endorsing the BN candidate for Kajang.

“We are not asking the people to vote for BN, because it is the root cause of all our problems,” said Nasir.

Nor were PSM supporting PR’s candidate Anwar Ibrahim, or lending the opposition coalition its machinery.

PSM secretary-general S Arutchelvan said it was not endorsing any candidates and would allow Kajang voters to decide for themselves.

“We will be focusing on our own roadshow every weekend to educate the public on issues such as the rising cost of living, the TPPA and the GST. So we will not be able to spare our people to campaign for PR in Kajang,” said Arutchelvan.

“If they request our help, we may reconsider. But at this point, the biggest help PSM can give is to not contest and split the votes,” he added, pointing out that PSM was a small party with limited resources.

Arutchelvan said the idea of contesting in this election in the first place did not com from within the party, but from activists keen on having a third force represent them in the polls.

“In this election, we are taking a position that we feel is principled. From the start, we have not supported this by-election, so if we contest, we are contradicting ourselves,” said Arutchelvan.

“I feel the reason this by-election was engineered was because of some internal issues within PKR that it was unable to solve.

“The reason for this by-election doesn’t make sense, and I don’t see any plausible reason for the Kajang assemblyman to step down,” he added.

The Kajang state seat fell vacant following the resignation of Lee Chin Cheh on Jan 27. The Election Commission has fixed March 23 as polling date and nomination on March 11. The advance polling process will be held on March 19. 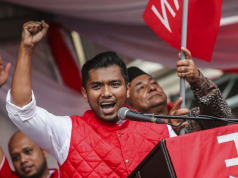