New Delhi, January 5 – Security around the country’s airports has been strengthened and all anti-hijacking measures put in place after intelligence agencies warned of a possible hijack attempt on an Air India flight.

“Security around all the airports have been stepped up and we have taken all the measures that are required in the wake of the alert from intelligence agencies,” official sources said in New Delhi on Sunday.

All anti-hijacking measures have been put in place, they said, adding that passengers’ checking has also been beefed up at some of the major airports, including Indira Gandhi International Airport in New Delhi.

Officials of the Airports Authority of India (AAI), civil aviation and CISF on Sunday attended an emergency meet to deal with the terror threat. The security agencies have identified sensitive airports, including Kabul, and say that the Delhi-Kabul flight could be targeted.

The alert has been issued in the run-up to the Republic Day and US President Barack Obama’s visit to India. A threat call was received by the Air India on Saturday evening to blow up their office in Kolkata triggering the airline officials to call for an emergency meeting with Airport Authority of India. 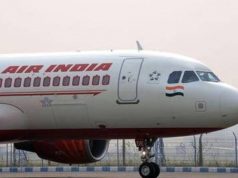 Air India becomes first airline to use “Taxibot” on Aircraft