KUALA LUMPUR, Aug 14 — Former MIC president Datuk Seri S. Samy Vellu declined to give any comments on the election for the top party post in September.

Considering himself now only an ordinary member, the former longest serving MIC president said he would completely leave the matter to MIC members and leaders to decide.

“I do not want to make any comments on MIC as I believe the time is not suitable for any statements. I will just wait for the outcome on who are the candidates and victor,” he said when met after launching the biography of MIC veteran and social activist Tan Sri Devaki Krishnan entitled ‘Tan Sri Devaki Krishnan: With Elegance and Commitment’, here today.

The 192-page biography among others recounts the life and involvement of Devaki in activities of associations as well as her struggle for MIC.

The heat on the president post election on Sept 22 has certainly risen several notches today when MIC deputy president Datuk Seri Dr S. Subramaniam responded positively to speculation on him joining the fray for the top post.

The election for other posts such as the deputy president, the three vice-presidents and 23 Central Working Committee members will be held in November or December. 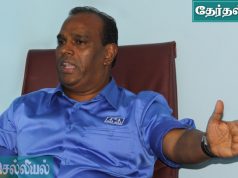 Palanivel confident of strong support for his leadership