SHAH ALAM: The High Court here today postponed the hearing of the murder of  Kim Chol or Kim Jong-nam, the estranged half-brother of North Korean leader Kim Jong-un, as the Vietnamese woman charged with murdering him was not fit to testify today.

Judge Datuk Azmi Ariffin postponed the hearing to April 1 after lawyer Hisyam Teh Poh Teik, representing the woman, Doan Thi Huong, 30, informed the court that his client was physically and mentally unfit and requested the hearing to be postponed.

“My client has not been able to sleep for three nights and only slept for an hour after the charge against (another accused) Siti Aisyah was withdrawn.

“She is not fit, physically and mentally, and I request for today’s hearing to be postponed. My client should also be sent to a hospital for further examination. I ask my lord to show mercy and compassion to her to give her some space,” he said.

Doan, who was supposed to enter her defence today,  and Siti Aisyah were charged with four others still at large with the murder of Jong-nam at the departure hall of the KL International Airport 2 (klia2) at 9 am on Feb 13, 2017.

Earlier, Azmi asked Doan if she was not well, and the woman, who was standing in the dock and looked pale and weak, replied “I’m feeling stressed”.

Following which, the judge said:  “I wish to carry on with this case, but unfortunately, from my observation looking at her, she is not well, mentally or physically. She must be given the opportunity to be attended by a doctor. We will arrange a letter for her treatment”.

Hisyam also applied to the court for the identity of one of the defence witnesses not to be expose by the media as the person is an important witness where communications would only be through video and recording.

The lawyer said he would also be submitting a representation to the Attorney-General’s Chambers for the murder charge against Doan to be dropped.

Last Monday, Siti Aisyah was given a discharge,  but not amounting to an acquittal, by the court  after the prosecution  withdrew the murder charge against her.

On Aug 16, 2018, the court ordered Siti Aisyah and Doan to enter their defence on the charge.

They were charged under Section 302 of the Penal Code, which provides for the mandatory death sentence upon conviction. 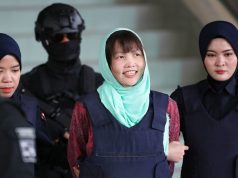