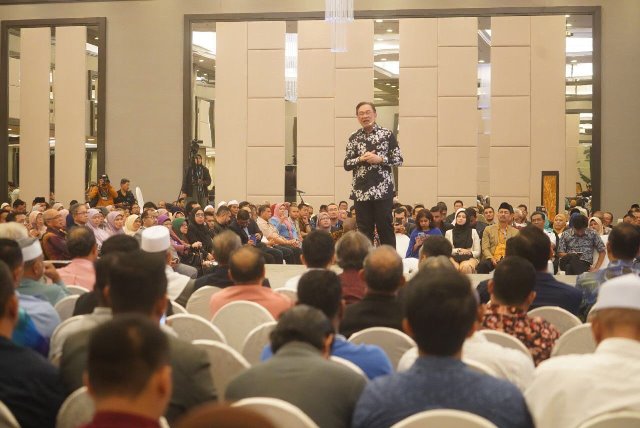 SHAH ALAM — The Muslims in this country need to step forward in breaking the  racism fort to foster a country that is fair and impartial.

Parti Keadilan Rakyat president Datuk Seri Anwar Ibrahim said Muslims in this country needed to be aware that the true strength of Islam was in its capability to break the racism wall which was restrictive to unite people of diverse nationality and religion.

“Islam eliminates the principle of racism which is narrow and stresses the spirit of humanity,” he said when delivering a speech at the National Seminar on Living Together in Diversity: Fostering a Peaceful Race and Culture here yesterday.

The Port Dickson Member of Parliament also parried the impression that Muslims could not appoint non-Muslims as leaders or befriend them.

Highlighting the history of the hejira of Prophet Muhammad from Mecca to Medina, Anwar said during the hegira there was a person who was not a Muslim who helped the Prophet Muhammad in the journey.

‘’If Islam forbids Muslims from being close to non-Muslims, how could the Messenger of Allah have accepted the help of a non-Muslim in among the greatest events of the Muslim community so that it was raised as the date for the beginning of the Islamic year,” he said.

In the seminar, Anwar also dismissed the perception that he was a liberal person and did not have a Malay soul.

He said he was a person with a Malay soul but adhered to the principle of helping people regardless of race or religion.