SHAH ALAM: A witness in the murder trial of Cradle Fund chief executive officer (CEO) Nazrin Hassan told the High Court here today that the man’s body was unlike the bodies of other fire victims when it was found.

A fire officer at the Damansara Fire and Rescue Station, Tanhoss Bah Agem, 29, who is the 13th prosecution witness, said Nazrin’s body was found in lying in a straight position, about 0.3 metres from the bed in his room.

Tanhoss was the acting supervisor for operations at the fire station at the time of the fire incident at Nazrin’s gouse at Mutiara Homes,Mutiara Damansara on June 14, 2018.

Based on his eight years of experience with the fire department, he said, there were more than three fire cases involving fatalities, where the victims were often found in a situation trying to save themselves.

“Normally the victims are found in various positions. Some, on their knees, lying  with face down and so on.

“Normally, if the victim could not find the way out, they will die there (the last place where the victim is looking for a way out). However, in Nazrin’s case, it was like he did not try to save himself,” he said when questioned by Selangor prosecution director Datuk Salim Soib @ Hamid before Justice Datuk Ab Karim Ab Rahman.

Salim : When you entered (Nazrin’s) the room, how was the smoke?

Tanhoss : There was less smoke and the victim could be seen clearly.

Salim : What did you inspect?

Tanhoss : I checked the victim’s pulse and listened to his breathing, found he was lifeless. His mattress was 100 per cent burnt. I also saw burnt marks and wound on the head, three puncture marks on the left neck and a burnt object on the chest.

Salim : What was the burnt object?

Tanhoss : I am not certain what it was.

Salim : Was there a wound on the victim’s head? Describe the wound and the puncture marks.

Tanhoss : The wound was on the victim;s left head. His hair was wet, not sure whether it was blood or what, but the wound was deep, I could see something white inside. Only that I was not certain if it was the inner layer of the skin or the skull. On the puncture marks, there was some blood stains.

Tanhoss also said after examining Nazrin’s pulse and breathing, he went downstairs and saw the victim’s wife, Samirah Muzaffar, 44, in the kitchen and told her that her husband was unconscious.

“The wife became aggressive. She wanted to dash into the room. I told her that to calm her down. However, she said to me that she wanted to know if her husband was dead or not?” he said.

Tanhoss said Samirah insisted on being told about her husband’s condition and when told that he was dead, the woman gave a sigh.

He demonstrated how Samirah gave a sigh in the court.

On March 12, Samirah, 44, a former senior executive at the Intellectual Property Corporation of Malaysia (MyIPO), and two teenagers, aged 17 and 14, were charged, along with Indonesian citizen, Eka Wahyu Lestari, who is still at large, with Nazrin’s murder.

They are charged under Section 302 of the Penal Code read together with Section 34 of the same Act.

The hearing continues next Friday. 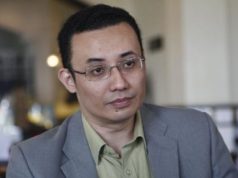