“At the moment, we have no such intention,” he told reporters briefly before chairing the party’s emergency meeting at the Gerakan headquarters here today.

Meanwhile, Lau said the meeting was held to discuss the current development in the country’s political landscape.

“If there is a new prime minister, for example, we discuss how Gerakan as a political party can play a role in the country’s political arena,” he said. 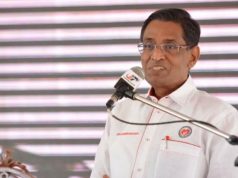