DHPP (Dewan Himpunan Penyokong PAS) Indian members must not sacrifice the rights of their community.

If PAS is not extremist party, how do you explain the destruction of a more than a century old Sri Madurai Veeran temple in Alor Setar a few months back. The temple was built even before the country became independent and long before PAS was formed.

How do you explain the destruction of Munisverar temple in Kuala Kedah to make way for a futsal court.

According to the Indian associate members of PAS in the Dewan Himpunan Penyokong PAS (DHPP) PAS is not a religious extremist party. The temples were demolished because they were illegal.

Perhaps these handful of subservient Indians could keep these fairy tales to the gullible.
If you have these Indian members who are not even considered full fledged members of PAS coming to the defence of PAS, a party that has no place for them as they are non-Muslims. 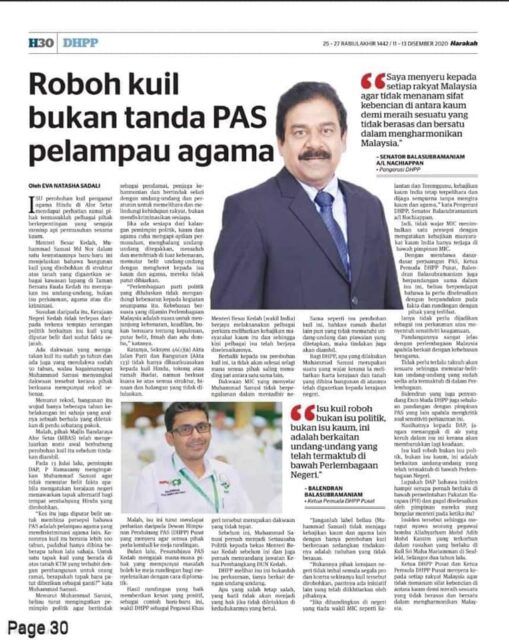 It is difficult to explain why Indians with some degree of self-pride and dignity would consider to join PAS as second or third class citizens.

Unless of course, these Indian associate members without voting rights have some things to gain; maybe some political appointments or contracts.

If these Indian members have some dignity and pride left, they would resign en masse from party that essentially promotes apartheid in this country. More so much after the destruction of their temples and the Kedah Menteri Besar Muhammed Sanusi Md Nor associating Indians with toddy drinking.

Nobody of the right mind, Muslims or non-Muslims would defend the racist and religious extremist Kedah MB Sanusi.

Indian associate members must not sacrifice the religious and cultural rights of their community by being subservient and servile to the extremist party, PAS.

It is not simply worth to defend PAS just to secure bread crumbs in the form of monetary rewards.