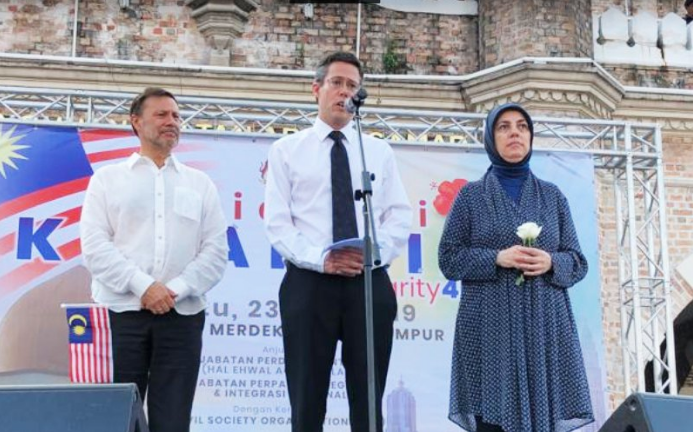 KUALA LUMPUR: Opening his speech with ‘Assalamualaikum’ (Peace be Upon You in Arabic), New Zealand’s High Commissioner to Malaysia, Hunter Nottage expressed his gratitude for the sympathies and support from Malaysians over the terror attack at two mosques in Christchurch, New Zealand, on March 15.

Speaking at the “Solidarity4Peace” rally at Dataran Merdeka  here today, Nottage who mixed his speech with a little bit of Malay,   also conveyed the condolences from New Zealanders to Malaysians over the death a Malaysian teenager Muhammad Haziq Mohd Tarmizi, 17, who was killed in the massacre by a white supremacist.

“New Zealand berasa sangat sedih (is very sad). It is with great sadness that I convey the condolences, compassion and sympathy from the Prime Minister of New Zealand and all New Zealanders…terima kasih (thank you) for being here for the  Solidarity For Peace (rally).

“Sadly the victim includes a Malaysian, our thoughts are very much with you, your families – some of which are here and your communities,” he said.

Nottage pointed out that the many public gatherings filled with grief and tears organised in New Zealand, including the nationwide gathering and prayers held yesterday, was a reflection of togetherness and respect.

“We mourn together, we stand together in the name of unity dan (and) New Zealand amat berterima kasih kepada Malaysia (New Zealand is very thankful to Malaysia). When any part of our body suffers, the whole  body feels pain. We are so sorry,” he added.

Yesterday, New Zealanders gathered for nationwide prayers to mark one week since the mass shooting at two mosques in Christchurch, which killed 50 worshippers and injured over 40 others.

Prime Minister Jacinda Ardern led thousands of mourners in prayer at a park in front of the Al Noor mosque and in a short speech said :”New Zealand mourns with you. We are one,” followed by two minutes of silence.

On March 15, New Zealand suffered an unprecedented terrorist attack when a mass shooting by a white supremacist terrorist occurred at the Al Noor and Linwood mosque, in Christchurch during the Friday prayers.

Meanwhile, on the same stage, Australian High Commissioner to Malaysia, Andrew Goledzinowski described the attack committed by an Australian as a disgrace to his country.

“Its is true that terrorism has no religion, it has no nationality but its also true in this case that the terrorist is an Australian.

“Which is matter of great shame for us, but if he intended with his action to separate us.. he has failed spectacularly and this gathering proves that ,” he said.

Echoing Nottage’s views, Turkey’s Ambassador to Malaysia, Dr Merve Safa Kavakci said, “We stand by the side of peace, with the rest of the Muslim community and the rest of world community who believe that peace will win.” 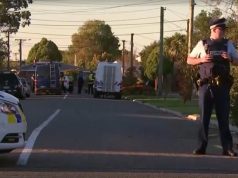