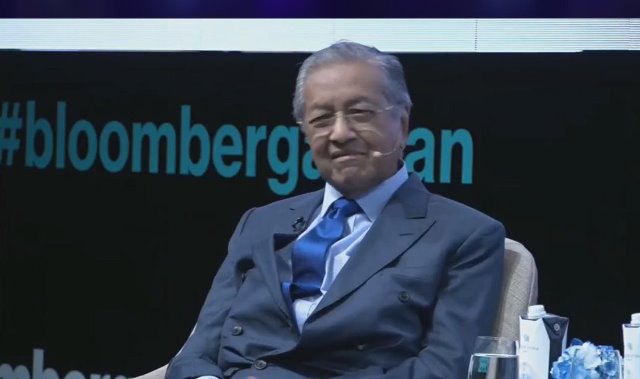 KUALA LUMPUR — Tun Dr Mahathir Mohamad has vowed not to leave Malaysia in shambles when he eventually steps down as prime minister.

The 93-year-old said it was his intention to continue working hard for the country and resolve the problems at hand.

“The last thing I want to do is to go away leaving this country (Malaysia) in shambles like the previous one (prime minister). So I am working hard for the country to the best of my ability, and hopefully we’ll be able to make corrections and solve most of the problems we’ve inherited (from the previous government),” he said.

Dr Mahathir said this at a session on ‘The Future of Malaysia and Asean’ at the 5th Bloomberg Asean Business Summit in Bangkok today. It was hosted by Bloomberg Television chief international correspondent for Southeast Asia, Haslinda Amin.

To a question, Dr Mahathir said he would stick to his promise to pass the baton to PKR president Datuk Seri Anwar Ibrahim.

Asked whether Anwar was ready for the job, Dr Mahathir said: “It’s not a question of whether he is ready or not. I made a promise and I’ll keep to my promise.”

Dr Mahathir also spoke about his Cabinet, saying that there would not be any reshuffle at the moment and he would only do so if there was a necessity.

Explaining his stand on the matter, he said: “When you reshuffle the Cabinet, you cause a lot of heartaches to many people; they may react in a way that is detrimental to good relations….I don’t casually remove people, putting in new people. I haven’t done that before and I will not do that now.”

Dr Mahathir said his Cabinet worked very well together as a team.

“In most countries after a change of government, there will be people thrown out, taken in…that kind of thing happens in other countries, but in Malaysia we don’t like changing ministers too often,” he said.

Queried on his dream for young people in Malaysia, the prime minister expressed hope that they would be sensitive about developments surrounding their country.

“They should have a love for the country and are willing to build Malaysia to become a developed country,” Dr Mahathir said.