The Law Minister’s statement justifying the PN government’s continued suspension of Parliament demonstrates an alarming lack of comprehension of the basic tenets of democratic governance.

The Law Minister stated the PN government is giving “priority” to fighting the pandemic and therefore will continue to avoid a Parliamentary session.

While the Law Minister claims the suspension of Parliament is necessary to combat the pandemic, so far its pandemic response is failing. Our vaccination rate is among the slowest in Asia and our infectivity rate is one of the highest in Asean.

A democracy which can opt to suspend itself without consent is no democracy at all. It is authoritarian. In Malaysia, Parliament’s standing is subject to arbitrary, closed door decision-making of unelected individuals – a true perversion of the system of checks and balances enshrined in the Constitution. 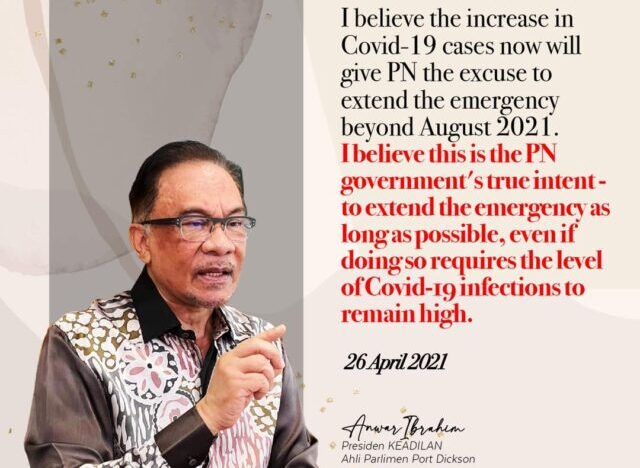 Democracy persists in times of distress and calamity. The people’s voice cannot be extinguished by the devious machinations of power hungry leaders.

His Majesty’s wise statement of 26 February 2021 asserts that the emergency powers granted to the government should not be used as an excuse to avoid Parliament. Not a single ordinance enacted during the emergency can be shown to have significantly reduced the spread of Covid-19 in the country.

The emergency measures, on the contrary, have been used to harass journalists and media and have been used to grant the PN government unfettered access to public funds with no transparency or Parliamentary accountability, including drawing nearly 50% of the National Trust Fund to procure vaccines.

There is ample evidence that the PN government is engaged in excessive borrowing and dubious spending which is precisely why Parliament must be allowed to fulfill its Constitutional duties.

There is no clarification about the conditions that would indicate an end to the emergency from the PN leadership. I believe the increase in Covid-19 cases now will give PN the excuse to extend the emergency beyond August 2021.

I believe this is the PN government’s true intent – to extend the emergency as long as possible, even if doing so requires the level of Covid-19 infections to remain high. Given the slow rollout of the vaccination program, I am concerned that there will be no sitting of Parliament in 2021 which for the PN government would be an epic failure.

For the country this presents a dire threat. The historic levels of unemployment and underemployment will persist without major economic reform. The regional competition for foreign investment is so stiff that Malaysia has and will continue to lose its position.
The unchecked borrowing and spending may saddle future generations with insurmountable debts. The economy cannot recover when there is no confidence in the government’s stability, its policy agenda and its adherence to the rule of law.