PUTRAJAYA — The Indian government has expressed full support for the action taken by the Malaysian government in addressing the issue over the Sri Maha Mariamman temple.

According to Wisma Putra, the Indian government also assured that they would not interfere with the affairs of country in a discussion with the Foreign Ministry.

The talks with the Indian High Commissioner to Malaysia was held following the hand over of a memorandum by Hindu People’s Party president, Arjun Sampth to the Consulate General of Malaysia in Chennai last Wednesday, the ministry said in a statement yesterday.

According to Wisma Putra the memorandum from the party, also known as the Hindu Makkal Katchi, condemned the incident claiming the government was biased against Hindus in Malaysia and did not take any action on the incident.

“The Malaysian government takes a serious view of the statement by the Hindu Makkal Katchi which was made without basis and seen to be irresponsible with malicious intent, to tarnish the good bilateral relations between Malaysia and India,” the statement said.

Wisma Putra added that Prime Minister Tun Dr Mahathir Mohamad in his speech in Parliament also stated clearly that the incident was criminal and no racial or religious elements were involved.

The riots, sparked by a clash during protests against the relocation of the Sri Maha Mariamman temple in USJ 25, Putra Heights, near here has resulted in a firefighter being seriously injured, several other people also hurt, 23 cars torched and a section of the One City Mall damaged.

The injured firefighter Muhammad Adib Mohd Kassim is currently being treated at the National Heart Institute and is reported to be in critical but stable condition.

As of yesterday, the police have arrested 42 individuals to facilitate investigations into the case. 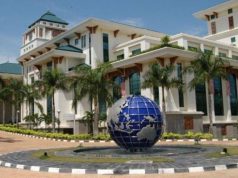