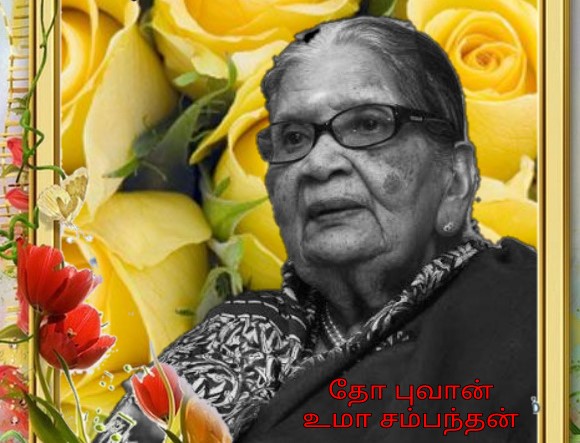 “May the family remains strong in facing this difficult situation,” she tweeted yesterday.

Uma was 90 and leaves behind a daughter Deva Kunjari.

“Uma was one of the first persons I met when I became a minister, her blessing was very important for me as I hold her dear to my heart. She used to confer with me on state issues and was very concerned about political development in our country,” he said in a statement.

Kula Segaran said Uma’s daughter, who is a lawyer, has always been a close friend of his family.

He said Uma was an activist, social worker as well as a leading figure of the cooperative movement in Malaysia.

“She was also well known for charity and as an advocate for women’s issues and rights and also one of the founders of the National Council of Women Organisations (NCWO) and was its president at one point. She was devoted in serving her country and her people, just like her husband and shall always been remembered as such,” the minister said.

Sambanthan was the fifth president of the MIC from 1955 to 1973, and one of those who fought along with Tunku Abdul Rahman and Tun Tan Cheng Lock for the independence of the country.